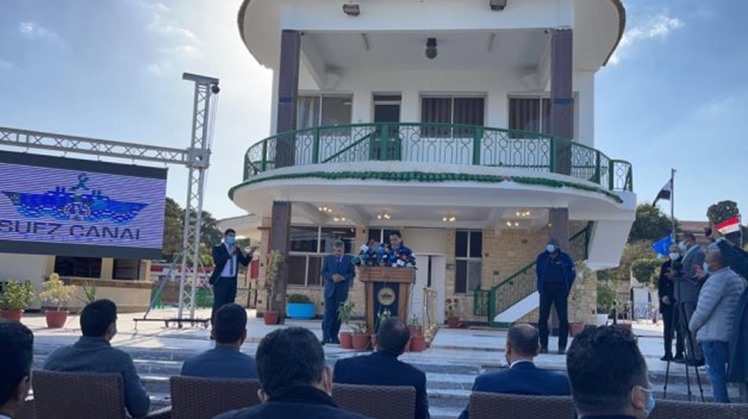 Sat, Mar. 27, 2021
SUEZ, Egypt – 27 March 2021: On a press conference Saturday, Egypt's Suez Canal Chief Lieutenant General Osama Rabei has announced the latest developments on the efforts to refloat the EVER GIVEN vessel that ran aground.

This press conference was held in Port Fouad city, in Port Said governorate,

In his speech, Rabei clarified that the incident did not occur in the new shipping lane of the Suez Canal, but it took place in the southern entrance of the canal.

He further said that the number of the ships awaiting in the Suez Canal blocked by the vessel has reached 321 vessels, and that the authority is providing them all logistic services they need.

The EVER GIVEN ship, 400 meters long, 59 meters wide, and it has 18,300 containers onboard with a capacity of 224,000 tons ran aground due to bad weather and sandstorm and wedged diagonally across the canal at 151km of the canal, where vessels pass through from both directions, since March 23, 2021. Being stranded at this point, the ship resulted in the suspension of the international maritime trade through the canal.


“No ships stranded in the Suez Canal have changed their courses to other routes,” Rabie said, adding that he rules out any ships would change their courses in the future, explaining that the Suez Canal “is the shortest passage for the maritime navigational traffic one the world.”

“On Friday, there was an indication of success to refloat the ship, but we cannot guarantee when exactly the refloating process complete,” Rabie said.

He also added that “sand storm could not be the main cause of the incident,” but there will be investigation to know the exact reasons after refloating the ship.

“In such incidents, we ask the captain to keep and have all documents, videos and audios for the investigations,” he explained, adding that compensation will be considered.

EVER GIVEN vessel, according to Rabie, has passed through the canal before. Offloading the containers is the third scenario that could be conducted to refloat the ship.


“We cannot say that we have not been affected when it comes to the revenues because the other vessels already awaiting in the canal,” Rabie said, adding that offloading the containers is the third scenario that could be conducted to refloat the ship.


A representative of the Dutch company team said that they could not set a specific time to know when exactly for refloating the ship, said Suez Canal Chief Rabea. He also assured that President Abdel Fattah El Sisi is closely following up on the situation of the aground vessel.

navigation to be resumed in Egypt's Suez Canal after 6 days of suspension Mon, Mar. 29, 2021