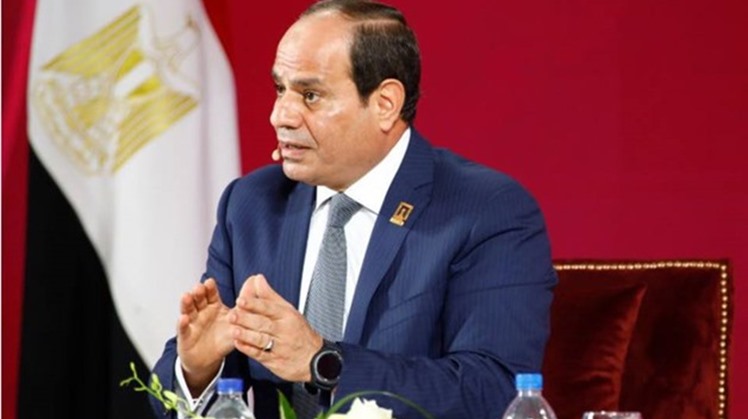 Wed, Sep. 2, 2020
CAIRO – 2 September 2020: Egypt’s President Abdel Fatah al Sisi said that he supports any steps that would bring peace to the whole region while maintaining the rights of the Palestinians and security of Israel.

During a phone call with Israeli Prime minister Benjamin Netanyahu, Wednesday, Sisi hailed the US -sponsored UAE-Israeli deal. He also affirmed the necessity of refraining from taking any unilateral measures that would undermine the peace process, especially annexing any Palestinian lands.

Sisi explained that avoiding these measures would allow the resumption of negotiations between the Palestinian and Israeli sides, in order to reach a fair and comprehensive conclusion on the basis of a two-state solution and in accordance with international references.

Sisi also stressed during the call on the importance of adhering to the Palestinian-Israeli truce on the Gaza Strip, in light of Egypt's continuous efforts to reduce tension between the two sides.

Ob August 13, Sisi praised the announced agreement of normalization between the United Arab of Emirates and Israel under the US brokerage.

“I followed with great interest and appreciation the tripartite joint statement between the United States of America, the […] United Arab Emirates and Israel regarding the agreement to stop Israel's annexation of the Palestinian territories,” said President Abdel Fattah El Sisi on his official Twitter account.

He praised this move as it would “bring peace to the Middle East,” Saying “I value the efforts that were exerted by those who in charge of this agreement in order to achieve prosperity and stability for our region.”

Brokered by the United States of America, both the United Arab of Emirates and Israel reached an agreement of normalization in return for putting an end to the Israeli settlements in the Palestinian West Bank, to be the first Gulf State country that normalizes relations with Israel.

The announcement of the agreement came during a phone call between Crown Prince of Abu Dhabi and Deputy Supreme Commander of the UAE Armed Forces, US President Donald Trump and Israeli Prime Minister Benjamin Netanyahu.