Egypt has ‘sincere desire’ to make progress on GERD talks, legal agreement on filling, operating to be prioritized: Sisi 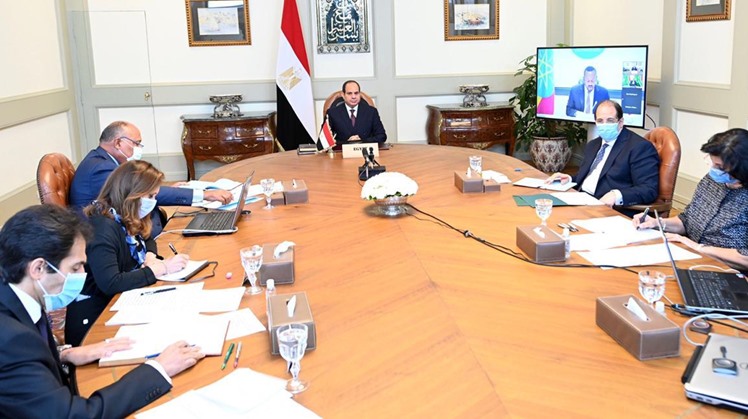 Presidency spokesperson Bassam Rady added in a statement that Egypt, Ethiopia and Sudan agreed on prioritizing reaching legal agreement on the Grand Ethiopian Renaissance Dam filling and operating and to be followed with another comprehensive agreement between the three countries.

Sisi added that achieving progress regarding the ‘contentious issues’ requires ‘political will’ which enhances the opportunities and exerted efforts along with supporting building-trust and achieving common interest between the three countries.

According to Sky news Arabia, Abbas added that the three countries participated in the mini-summit that was held via video conference earlier Tuesday as part of the African Union-sponsored negotiations.

On Friday, Sudanese Irrigation Minister Yasser Abbas announced receiving an invitation from South Africa to participate in a mini-summit on GERD on Tuesday, July 21, according to Sky News Arabia.

“President [Sisi] reaffirmed, during the phone call, Egypt’s stance which based on the principle that Nile water represents an existential issue for the Egyptians, and then reaching a comprehensive legal agreement between all parties on the rules for filling and operating the dam is imperative,” said Egyptian Presidential Spokesperson Bassam Radi in a statement on Friday.

President Sisi voiced his rejection of any unilateral measures that would harm Egypt's water rights, expressing his appreciation for President Ramaphosa’s efforts in this regard.

The South African President praised Egypt’s way in dealing with the dam issues during the negotiations, which have been brokered by the African Union.

The phone call between both leaders came two days ago after publishing perplexing media reports saying that Ethiopia started filling the dam’s reservoir, without reaching a final agreement between Ethiopia and the downstream countries [Egypt and Sudan].

Last week, the Ethiopian Broadcasting Corporation (EBC), the state-owned TV, reported that Minister of Water, Irrigation and Energy Seleshi Bekele announced the start of filling the dam with 4.9 billion cubic meters of water within the first stage of the filling process. However, the EBC apologized for “misinterpreting” this news.

One day later, on July 16 Ethiopian Ministry of Water Resources and Irrigation denied such reports, announced the Sudanese Ministry of Foreign Affairs.

The AU brokered a 11-day round of negotiations between the three countries to reach an final agreement on technical and legal points of contentions. However, the discussions reached another stalemate.

Egypt previously decided to request the United Nations Security Council’s intervention in the dispute on Ethiopia’s massive dam, after Egypt had said several times that the two countries have reached a deadlock. In addition to this, the United States and the World Bank (WB) brokered other previous rounds of negotiations over the period of time between November 2019 to February 2020; the negotiations also reached a deadlock.