'Egyptian magic got my heart': said Katy Perry and Orlando Bloom about their visit to Egypt 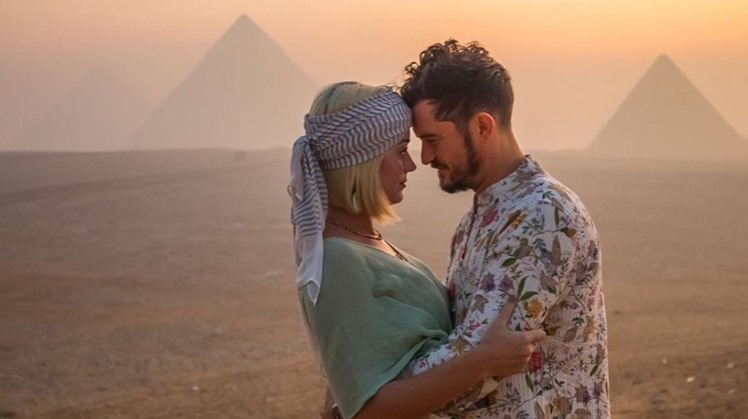 Tue, Nov. 5, 2019
Katy Perry didn't use fireworks to ring in her birthday, but instead opted to visit one of Egypt's most famed landmarks.

The American singer, who turned 35 on October 25, jetted to the north African nation to celebrate her big day, as she revealed on Instagram this weekend.

The Dark Horse star shared a series of atmospheric snaps that showed the pyramids of Giza standing proud in the background as she posed in the foreground.

"Ancient Egyptians believed that when you pass on, your heart had to be weighed. It had to be lighter than a feather to be qualified for the trip to the afterlife," Perry captioned the post. "My mother has called me 'feather' since I was a little girl and I hope after all is said and done my heart is as light as one. This is 35."

The Grammy Award nominee was joined on the trip by her fiance, Orlando Bloom – the two became engaged on Valentine's Day this year and are reportedly set to wed next month.

The Lord of the Rings actor shared his own ode to Perry and their visit to Egypt on Instagram, uploading three shots taken from the trip, including one of himself embracing Katy in front of the pyramids.

"It’s like looking out over the entire cosmos – Egyptian magic got my heart open to a download of love for my Scorpios wonder women both celebrating their birthday," he captioned the post.

One of Bloom's images showed the actor with his mother, Sonia, who joined the couple on the trip.

According to Us Weekly, Perry was joined by more than 60 friends on her holiday in Egypt, with the large party enjoying a cruise.

“How to build a powerful bond in 10 days,” the singer's friend, Markus Molinari, shared on Instagram. “Get 64 people hand picked by a musical goddess Katy Perry to live on a boat down the Nile with only one request from her that each of us step out of our comfort zones and for every meal sit with someone different. This would be our birthday gift to her.

"Beyond the magnificent gift of travel, she gave each of her friends memories of new friendship and a bond that only we will share for the rest of our lives."