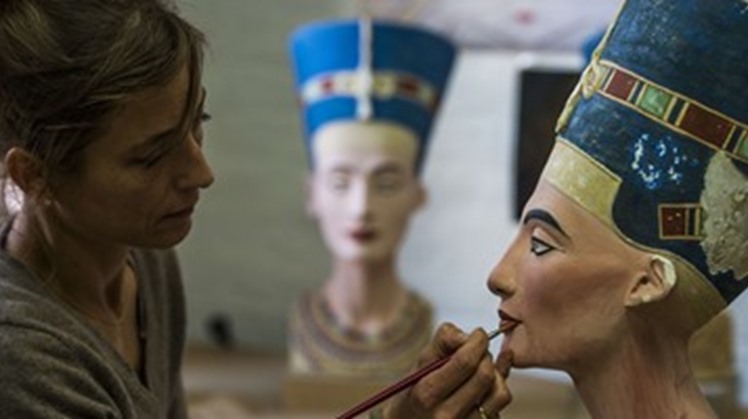 Sun, Sep. 18, 2022
For decades, Egyptians have been dreaming of returning some of the glories of their ancient civilization spread across museums and private collections around the world, and as Cairo prepares to open the "world's largest archaeological museum" at the foot of the Giza pyramids in November, former Egyptian Minister of Antiquities Zahi Hawass told the agency. AFP said it would soon demand the return of three of its greatest lost treasures.

Rosetta Stone
The Rosetta Stone dating back to 196 BC was the key that helped French linguist Jean-François Champollion decipher ancient hieroglyphs in Egypt. The stone was discovered by the invading French army of Napoleon Bonaparte in 1799 while troops were repairing a fort near Port Rashid (or Rashid). ) in the Nile Delta, near the Mediterranean, carrying extracts from an edict written in ancient Greek, an ancient Egyptian general text called demotic and hieroglyphic Comparison of the three texts finally helped solve a mystery that has baffled historians for centuries, Champollion announced his discovery on September 27 1822, + The stele has been kept in the British Museum since 1802, and on the other hand, the legend “captured by the British army in Egypt in 1801” and “presented by King George III” to the museum is engraved on it. Egypt has been demanding its return for decades, as the Egyptologist Heba said Abdel-Gawad said the inscriptions alone were "an act of violence that no one talks about, which the British Museum denies was destroying an artifact", and the museum told AFP that the stone was "delivered to the British as a diplomatic gift".

Nefertiti statue
A bust of the pharaoh's wife Akhenaten, whose name means "the beautiful came", was carved around 1340 BC, but was taken to Germany under controversial circumstances by a Prussian archaeologist after it was found at Amarna in 1912.

A portrait of one of the most famous women in the ancient world was later submitted to the Neues Museum in Berlin. Cairo demanded its return as early as the 1930s, but Germany has long maintained that it was handed over under a colonial-era partition agreement under which countries that Archaeological excavations funded the preservation of half of the finds.

Dandara Zodiac
It is a widely known Egyptian relief from the ceiling of the Pronos or the portico of the chapel dedicated to Osiris in the Temple of Hathor in Dender. It is like a celestial map from the Temple of Hathor in Qena in southern Egypt, and on the orders of the French official Sebastien Louis Solnier in 1820 it was hung on a ceiling in the Louvre Museum In Paris since 1922

The chart, considered "the only complete map we have of an ancient sky", is believed to date from around 50 BC.

According to European museums, there were no official requests to return the treasures "from the Egyptian government," and the Supreme Council of Antiquities in Egypt did not respond to an AFP request for comment.