The story of a monument.. a male mummy dating back to the Roman era in the Cairo International Airport Museum 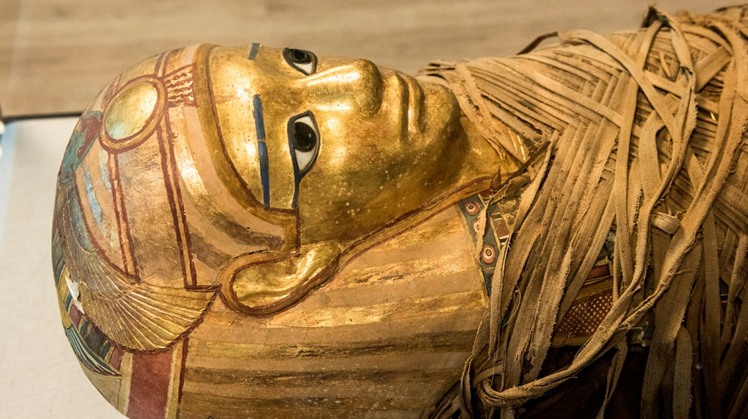 Sun, Jun. 19, 2022
Today we shed light on an artifact, the mummy of a man, as we continuously review a piece with its picture and some information about that piece and the place it was displayed, as well as the era to which it belongs.

The mummy of a man is wrapped in linen bandages with an elaborate pattern on it. This pattern appeared in the Roman era, at the time of the heyday of the quality of the art of mummy dressing.

The mummy’s head was covered with a gilded funerary mask made of cartonnage “a mixture of linen, gum and plaster.” The winged sun disk, a symbol of resurrection, decorates the forehead, and the eyes and eyebrows are inlaid. It dates back to the Roman era, the first or second century AD. It was found in Fayoum and is now displayed in the Airport Museum. Cairo International Hall 3.

The Cairo International Airport Museum was inaugurated in Terminal 3 in 2016, in light of the cooperation protocol between the Ministry of Antiquities and the Ministry of Civil Aviation, to serve as the first gateway to Egypt’s ancient history, and even a window to its remarkable monuments and lofty civilization.

The museum at that time occupied an area of ​​approximately 60 square meters, and contained (38) artifacts, until the year 2020 AD, and the museum was moved from its old place to the fourth floor in the same building with the aim of expanding it and displaying more artifacts, as its area occupies about 150 square meters. Approximately.

The museum currently displays a group of the most prominent archaeological pieces through which the visitor can live in the fragrance of the timeless history of Egypt in its various successive eras. Those pieces that represent a mirror of the various civilizations and arts of Egypt, starting from the Pharaonic era through the Greco-Roman eras, as well as Coptic art, ending with the Islamic and modern era.