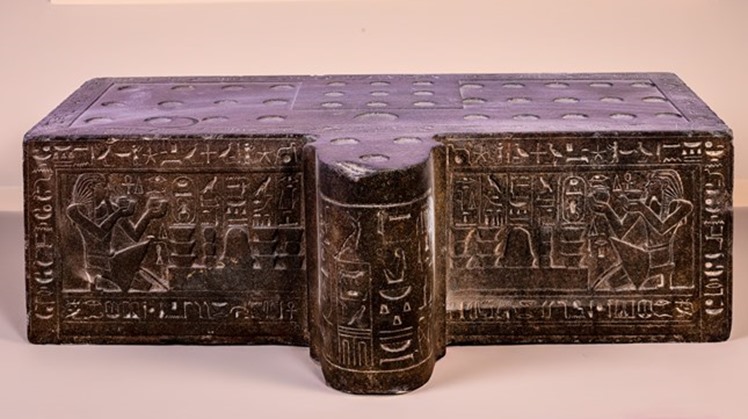 Mon, May. 9, 2022
Egyptian museums contain millions of rare archaeological holdings belonging to ancient Egyptian eras, each piece bears a story for thousands of years, and for this we will continuously review a piece with its image that shows some information about that piece and the place of its display, as well as the era to which it belongs, and among those pieces is an offering table. Especially King Thutmose III.

For the ancient Egyptians, both the deities and the dead had the same needs of the living, and they had to be provided with food and drink constantly. It is consumed by the deceased or the idol.


Offering tables were often presented to resemble the hieroglyphic sign of Hetep in the form of an offering table. The table consists of a rectangular plate in the form of a mat with a portion representing loaves of bread protruding from the middle of one side, according to what the Ministry of Tourism and Antiquities said. Representations of food, drink, and "offering formulas" are carved on the table itself, making the table eternally full.

This example comes from the Karnak temple and belongs to one of the most powerful kings of the Eighteenth Dynasty, the great warrior King Thutmose III. On the front sides of the table there are images of the king kneeling offering receptacles filled with a liquid, and on the upper surface, instead of carved items of food and drink, there are forty holes for offerings. The titles of the king were engraved on the prominent part of the table, and the sides were decorated with Isis necklaces and ancestor pillars, which represent protection and stability.

The piece we are about was discovered in Luxor, Karnak Temple, Amun's palace, middle courtyard, and it dates back to the era of the New Kingdom, 18th Dynasty, Thutmose III (about 1497-1425 BC). It is made of granite, and is now displayed in the Hurghada Museum.