A pic of the Blue Mosque in Cairo, dating back to 1910, and preserved in the Notre Dame Architectural Library. 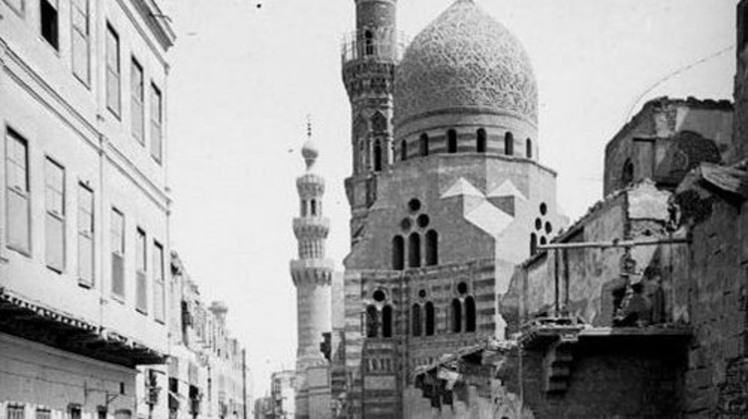 Thu, May. 6, 2021
Today we see a picture of the Blue Mosque on Al-Darb Al-Ahmar Street in Cairo, dating back to 1910 and preserved in the Notre Dame Architectural Library.

Ibrahim Agha Mosque Mustaftan, also known as (Aq Sunqur Mosque - Blue Mosque - Ibrahim Agha Mosque), and it is a mosque established by Prince "Aq Sunqur Al-Salari" and it is located in Al-Darb Al-Ahmar district, Bab Al-Wazir Street, built 747-748 AH (1346-1347 AD) . It was called the Blue Mosque, in reference to the great blue-colored ceramic group that covered the qibla wall.

The Aqsunqur Mosque is designed in the same style as the collective mosques (the mosques), its width is 80 meters, the length is 100 meters, and in the middle of it is an open courtyard surrounded by four colonnades with columns, the largest of which is the corridor towards the prayer direction that includes two aisles, while the remaining three contain one arcade each. The mosque has three doors: one on the western façade, and another on the northern façade. And the third is in the eastern façade. Attached to it is a sacred dome.

The chest of the eastern portico is covered with beautiful blue tiles. That is why the mosque was called the Blue Mosque. At the edge of the western façade, there is a cylindrical minaret in all of its rounds.

And the mosque is recorded as Relic No. 123, and this relic was later named after the Mosque of Ibrahim Agha Mustafzan, one of the great princes during the rule of the Ottoman Empire in Egypt, where the prince made a large building in the mosque in 1061 AH / 1651 AD, following the earthquake that the city of Cairo was exposed to at the time.