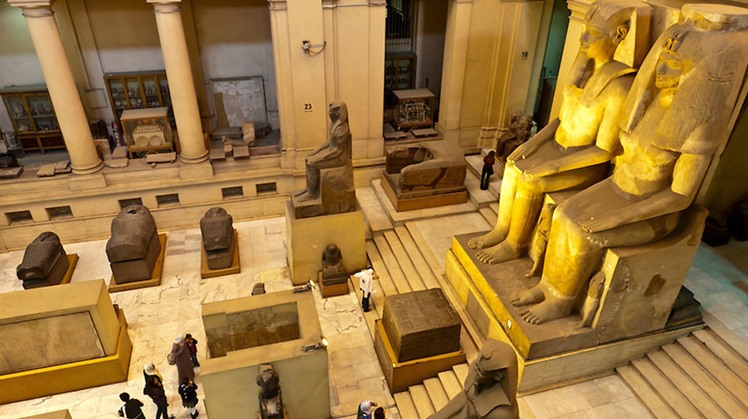 Sun, Nov. 22, 2020
A few days separate us from the transfer of royal mummies from the Egyptian Museum in Tahrir to the place of their permanent display in the National Museum of Egyptian Civilization, where the Ministry of Tourism and Antiquities is preparing for the preparations for the huge celebration, in the presence of a large number of ambassadors of the countries of the world, the press and the local and international media, where the process of leaving the royal mummies will take place In a majestic procession from Tahrir Square, witnessed by the whole world, where 22 mummies will be transported, and for this we review through the following report an introduction to the Egyptian Museum of Liberation and Civilization.

The Egyptian Museum in Tahrir is one of the most important and prominent international museums, and it contains extremely rare artifacts, dating back thousands of years, and the establishment of the museum came after Khedive Ismail approved the project to establish a museum of Egyptian antiquities in 1863, and behind the idea of ​​establishing the museum was the French Egyptologist Auguste Mariette, the first officer To occupy the antiquities and head of the Antiquities Authority in 1858, and he found that there must be an administration and a museum of antiquities, so he chose the Bulaq area to establish a museum of Egyptian antiquities and transferred to it the effects that were found during his excavations (such as the effects of the tomb of Aahhotep)

The design of the museum was chosen from among the 73 designs presented in the past to officials, while the design of the French engineer, Marcel Dornon, who built it in the style of classical Greco-Roman architecture, as for the façade of the museum is in the French style with circular arches, decorated with marble paintings of the most important and famous archaeologists in the world, On either side of the wooden entrance door are two large pebble statues of two women in the Roman style, but with pharaonic heads.

On November 15, 1902, Khadi Abbas Helmy II, the Egyptian Museum was officially inaugurated, and the museum includes more than 150,000 artifacts, the most important of which are the archaeological collections that were found in the tombs of the Kings and the royal entourage of the Middle Dynasty in Dahshur in 1894, and the museum now includes the greatest archaeological collection in the world expressing In all stages of ancient Egyptian history, it also includes King Mentuhib II and a group of statues of some kings of the 12th family, statues of Hatshepsut, Tuthmosis III and Ramses II, and a large number of royal coffins.

The National Museum of Egyptian Civilization is one of the most important national projects adopted by the state, as it is one of the largest international museums as well as the only museum of its kind in Egypt, the Arab world, the Middle East and Africa, as it includes all the manifestations of the richness and diversity that Egyptian civilization enjoyed during various eras, starting from prehistoric times. And up to the present time.

The museum, with its archaeological and heritage collections, is rooted in the depths of history, successive cultures, history of kings, sultans, governors, rulers, religions, beliefs, aesthetic expressions, ages of brightness, eras of extinction, human experiences and experiences, as it takes its visitors on a unique journey through the eras of Egyptian history to get acquainted with the long rich history of the world's oldest civilizations and the meaning of The most accurate, oldest country in history.

The Museum of Civilization deals with the intangible heritage, focusing on the living habits, arts and crafts that the Egyptians used and still practice, and according to the future visions of the remaining phases, which we are about to study, we achieve one of the most important goals of the museum, which is communication between visitors and puts the connotations of Egyptian civilization in the form of what can be added to the museum's elements from centers for industries , Handicrafts and traditional arts, as well as exhibitions in which the products of these industries, crafts and arts are displayed, as well as the planned archaeological gardens, as well as benefit from all the environment surrounding the museum, such as the unique characteristics of the lake, and its effective effect on healing many diseases, and finally in the presence of real archaeological sites. Within and around project boundaries.