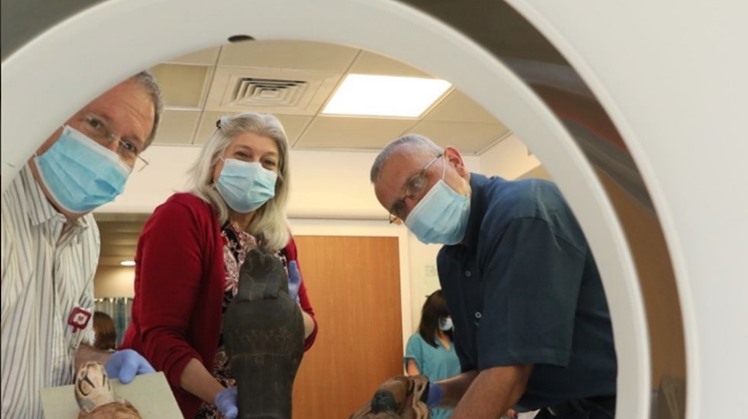 Mon, Jul. 27, 2020
When scientists peered beneath the wrappings of two small ancient Egyptian mummies thought to hold human hearts, they were taken aback: Not only were there no noticeable hearts inside, but the remains were not even human.

Rather, one of the mummies is tightly packed with grain and mud — a so-called corn or grain mummy — while the other holds the remains of a bird, possibly a falcon, that is missing a body part and several organs, the researchers found.

"It's missing its left leg, nobody knows why," said Dr. Marcia Javitt, chairperson of radiology at Rambam Hospital in Haifa, Israel, and an adjunct professor of radiology at The George Washington University in Washington, D.C., who helped scan the mummies with computed tomography (CT) on June 29.

The two mummies, both interred in sarcophagi, have been housed at Haifa Museum for about 50 years. However, "records were not kept as diligently as they are now," so not much is known about them except that they're more than 2,000 years old, Ron Hillel, registrar and head of collection management of Haifa Museums, told Live Science.

Over the past few years, the National Maritime Museum in Haifa has been going through its collection and determining the best way to preserve each artifact. When curators came across the two mummies, they realized they didn't know what was inside. The records noted they contained mummified hearts, but "we did the research and it didn't make sense," Hillel said. Often, (but not always) "the hearts were left in the body," of Egyptian mummies, Hillel said, because the ancient Egyptians thought that when people died, their hearts would be weighed against a feather representing ma'at, an Egyptian concept that includes truth and justice, Live Science previously reported. If the heart weighed the same or less than the feather, these people would earn eternal life; if not, they would be destroyed.