In Geneve Conferance, Egyptian activists call on international community to take action to condemn terrorism for its impact on human rights in Cairo 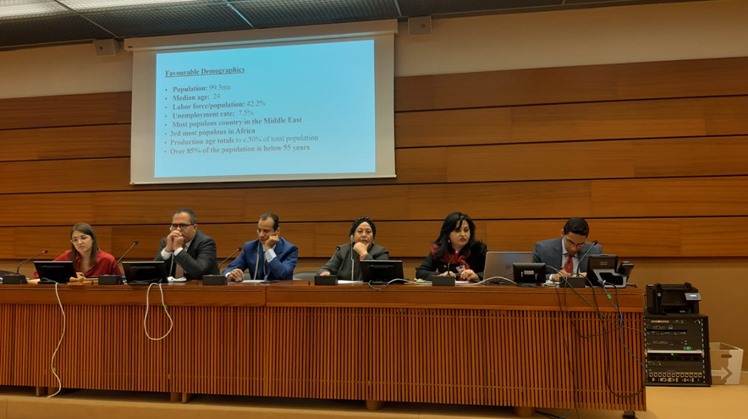 Mon, Nov. 11, 2019
CAIRO - 11 November 2019: Egyptian participants on the conference titled "Terrorism..Human right", held at the headquarter of UN Human Rights Council in Geneva, criticized strongly on Monday the silence of the international community towards countries that support terrorism in Egypt and the Middle East.

They pointed out that terrorism represents a pressure on the political and economic conditions and consequently on the human rights situation.

This conference was organized by Human Rights Foundation, Egyptian Center for Thought and Strategic Studies and Association of Women and Development in Alexandria, and managed by the Chairperson of the Forum for Development and Human Rights Dialogue, Said Abdel Hafez.

Moreover, the professor of political science at the American University in Cairo and a member of the advisory board of the Egyptian Center for Thought and Strategic Studies, Noha Bakr, said that Egypt has been witnessing serious reform steps in the field of economy since 2014 as political will has joined people in support of the decisions issued in this regard, but after the reform measures carried out by the government over the last five years, Egypt has witnessed an improvement in economic growth rates.

Also, Expert in the security and defense program at the Egyptian Center for Thought and Strategic Studies, Ahmed Eliba, said that Hundreds of tunnels in Sinai, used to smuggle weapons and infiltrate terrorist elements into Sinai, were destroyed. He asserted that terrorist operations increased in Egypt following the overthrow of the Muslim Brotherhood terrorist group.

Minister of Parliamentary Affairs Omar Marwan left Cairo on Sunday for Geneva, to attend the Universal Periodic Review (UPR) of Egypt, before the UN Human Rights Council next Wednesday.

Marwan confirmed earlier that the government had held meetings with a number of ministries and civil society organizations to review Egypt's efforts in the field of human rights, in preparation for the Geneva session.

He also affirmed that the Egyptian government had abided by its international commitments and had implemented many of the recommendations made in the previous session in 2014.

During the 12th periodic conference of the Network of African National Human Rights Institutions held in Cairo, Sisi said that the concept of human rights was not only limited to political aspects, presidential spokesman Bassam Radi reported.

He affirmed, in this regard, the keenness to enhance efforts of continental integration, to meet the aspirations and developmental and economic ambitions of the African states’ peoples.

US Secretary of State to visit Egypt as part of Middle East tour following Cairo-brokered ceasefire in Gaza Sun, May. 23, 2021