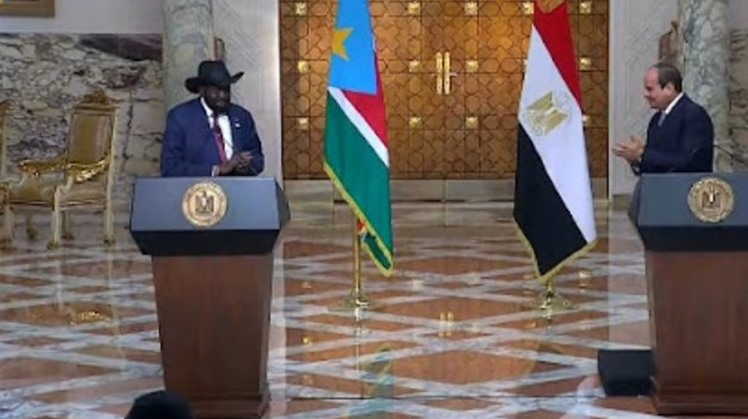 Sun, Oct. 10, 2021
AIRO – 10 October 2021: In a press conference held between Egypt's President Abdel Fatah El-Sisi and South Sudanese President Salva Kiir, Kiir said that Ethiopian Prime Minister Abiy Ahmed had promised him to resume negotiations with Egypt and Sudan on Renaissance Dam after the formation of a new government but failed to keep his promise.

Kiir called Cairo "our second home," saying he and President Abdel Fattah el-Sisi tackled the issues Ethiopia has with both Egypt and Sudan, as well as the problems it has with the Tigray people. Sisi said they discussed the developments in the Horn of Africa and Eastern Africa and means to contain their possible ramifications on the other nations in the region.

"In August, I went to Ethiopia on a one-day visit and I was promised that by October there will be negotiations after the formation of the government of Ethiopia. So, when I went there recently, there was nothing," Kiir said.

Kiir added that Ahmed is “not in a position” to start negotiations because the opposition is fighting him. The South Sudanese president said he told Ahmed Egypt could not be at peace as GERD stands without an agreement. Kiir also said it has come to his knowledge that Ethiopia has refused to talk to any party about GERD, especially Egypt.

Sisi said consultations with South Sudan on GERD have been ongoing, emphasizing a legally binding agreement on the filling and operation of the dam as per international law and the outputs of the Security Council so horizons of cooperation between Nile Basin nations may be opened up.

Meanwhile, Sudan is facing troubles and only Egypt and South Sudan are helping it, said Kiir.

Egypt and South Sudan are constantly in consultations over Sudan and supporting Abdel Fattah al-Burhan, Chairman of the Sovereignty Council of Sudan, so the country does not go back to war with the opposition groups.

Bilaterally, Egypt has agreed to help South Sudan in many fields and occasions, Kiir said, requesting that Sisi regularly sends delegations to South Sudan to monitor the progress of the agreements.

For his part, Sisi said several agreements on irrigation, trade, and industry have been signed, and a joint committee will convene regularly to monitor the progress of all the agreements.

Trade exchange will be increased, the access of Egyptian investments and goods into South Sudan will be facilitated, and Egypt will provide capacity building programs in different fields, Sisi said, adding that scholarships will be increased so more South Sudanese students study at Egyptian universities.

Further, old Egyptian projects in South Sudan will be revived, and Egyptian power stations will be renovated. The president promised Egypt will remain to be a strong supporter for peace, stability, and development in South Sudan, helping to resolve the root causes of challenges in the country.

Sisi visited South Sudan in November 2020. Since then, Egyptian and South Sudanese ministers and officials have met several times to strengthen ties. The president met with South Sudan Vice-President James Wani Igga in July 2021, where he affirmed once again Egypt's commitment to providing its fellow African state with all the technical assistance it needs.

Earlier in April, Egyptian minister of agriculture visited his South Sudanese counterpart to discuss wide-scale cooperation in their fields.

Qasir said the Egyptian Ministry of Higher Education will soon provide scholarships for South Sudanese students to study at the faculties of agriculture in Egypt, and a joint agricultural committee has been formed to follow up with implementing what has been agreed in a memorandum of understanding to establish an integrated farm in South Sudan.

Egypt and South Sudan: The Partnership of Stability and Development Mon, Mar. 7, 2022