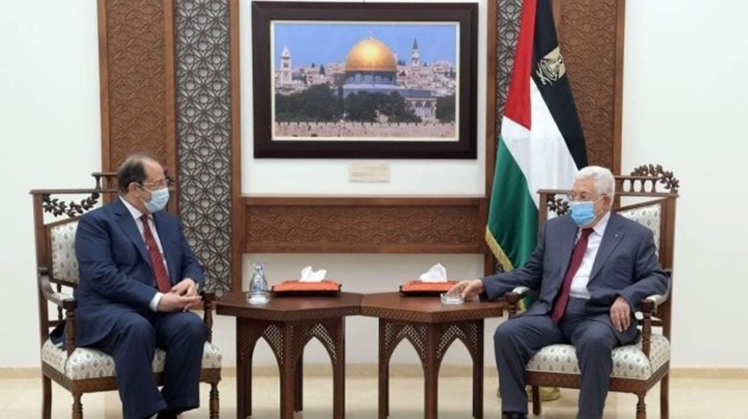 Mon, May. 31, 2021
CAIRO – 31 May 2021: Head of Egypt’s General Intelligence Service (GIS) Abbas Kamel has conveyed the president’s messages during his ongoing visit to the Palestinian and Israeli lands.

His visit aims to solidify the Egypt-brokered ceasefire that stopped Israeli hostilities against the Gaza Strip. These hostilities caused the death of 254 Palestinians and destroyed dozens of homes.

On Monday, he inspected the proposed sites to begin the reconstruction initiative of Gaza strip and met with a number of leaders from Hamas.

Sisi’s messages during the visit came as follows:

- Sisi stressed the need to unify Palestine’s internal front under the umbrella of the Palestinian Liberation Organization.

- Sisi called all regional and international powers to support Egypt’s efforts to reconstruct the Gaza Strip.

- Sisi assured that Egypt is exerting huge efforts to maintain truce reached between Palestine and Israel, and to pave the way for the return of the peace process in cooperation with international powers led by US.

- Sisi stressed importance of delivering all humanitarian aid to citizens of Gaza Strip.

Palestinian President Mahmoud Abbas agreed with Kamel to hold meetings between the secretaries-general of Palestinian factions in Cairo in effort to unite their ranks.

Kamel conveyed to Abbas Sisi’s support and affirmation that the Palestinian cause will “remain at the forefront of Egypt’s priorities.”

Egypt dispatched intelligence officials to Israel and the Palestinian territories to build on the ceasefire and resolve the issue of prisoners between Israel and Hamas.

Sisi said the discussions aim to avoid any escalation between Israel and Palestinians, reach comprehensive calm in the West Bank and Gaza, reconstruct the strip, and “build the Palestinian human.”

Kamel held talks on Sunday with the Israeli Prime Minister, Benjamin Netanyahu, and relevant Israeli authorities. The meeting aimed at solidifying the ceasefire.

The talks were conducted after President Sisi delegated Kamel to meet with Netanyahu.

Kamel met with Israeli Defense Minister on Sunday as per Sisi’s directives to move forward toward a comprehensive de-escalation in all the Palestinian territories.

Kamel discussed with Gantz the issue of the prisoners and the missing. The meeting discussed de-escalation between the Israeli and Palestinian sides and support to the Palestinian Authority.

A high-level delegation headed by Director-General of the Israeli Defense Ministry Amir Eshel and the head of the ministry’s Political-Military Affairs Bureau, Zohar Palti attended the meeting.

Gantz expressed thanks to Kamel and affirmed his desire to achieve peace on the long term and sustainable development in a way that backs stability in the region.
He also asked Kamel to convey his greetings to President Sisi for the efforts Egypt has made to restore calm and stability in the region and for the special security relations between Egypt and Israel.

The intelligence chief was accompanied by a number of ministers from the Palestinian Authority.

Abbas met with the Hamas leader in the strip Yahya Sinwar as well as senior Hamas officials, including Khalil Hayya and Rawhi Mushtaha.

The meeting came as per the directives of President Sisi and aimed to coordinate with all the Palestinian parties to solidify and build on the ceasefire.