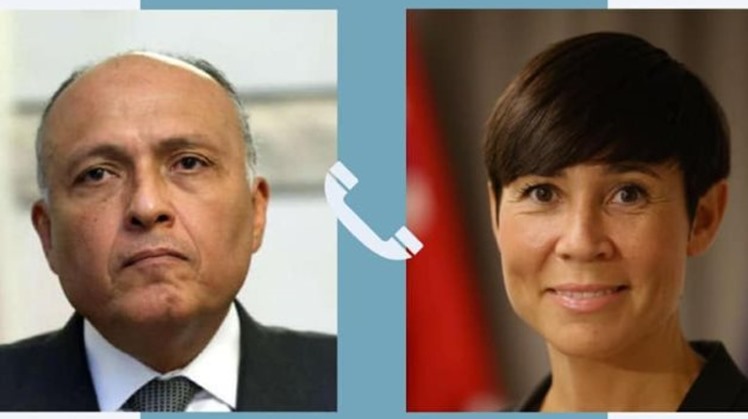 Sun, May. 23, 2021
CAIRO – 22 May 2021: Egypt’s Foreign Minister Sameh Shoukry received a phone call from his Norwegian counterpart, Ine Eriksen Søreide, on Saturday in which they agreed on the need to create the appropriate climate to urgently revive the Israeli-Palestinian peace process.

As they made a phone call, they agreed that the peace process should lead to a comprehensive political settlement to the crisis in accordance with the relevant international resolutions and in a way that prevents the repetition of escalation and fighting between the two sides.

This comes as an Egypt-brokered ceasefire came into effect on Friday 2 A.M. Palestine time (23:00 GMT), ending 11 days of Israeli airstrikes against the Gaza Strip and military response of Palestinian factions. The Israeli assault killed over 250 people.

Søreide hailed the intensive Egyptian efforts leading to the implementation of ceasefire by the Israeli and Palestinian sides.

The two ministers exchanged visions on the developments in the Palestinian territories and the ongoing endeavor to consolidate de-escalation between the two sides.

Shoukry and Søreide also discussed the reconstruction process in the Gaza Strip and the efforts to provide developmental aid to the Palestinian Gaza Strip and West Bank.

President Abdel Fattah El-Sisi earlier allocated $500 million to the reconstruction of Gaza Strip, a step that has been widely hailed.

Meeting with Cypriot Foreign Minister Nikos Christodoulides on Saturday Sisi stressed the importance of prompt work to revive peace negotiations between the Palestinian and Israeli sides on the basis of the two-state solution, international legitimacy decisions and the rules of international law.

Also on Saturday, An Egyptian security delegation visiting Ramallah in the wake of the Egypt-brokered ceasefire met with Palestinian President Mahmoud Abbas.