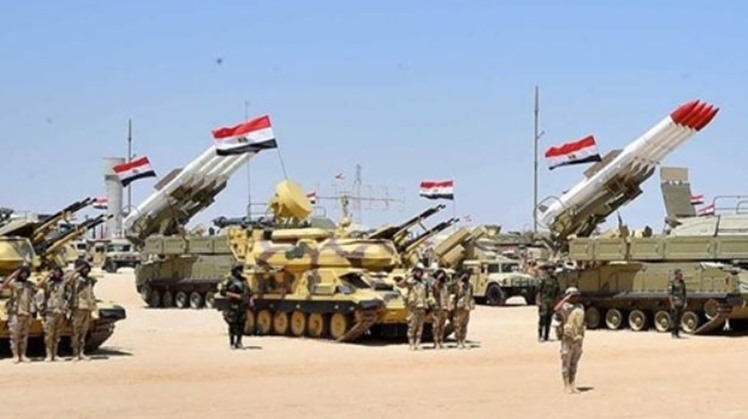 Sun, Sep. 13, 2020
CAIRO – 13 September 2020: Egypt's Minister of Foreign Affairs Sameh Shokry clarified that Egypt's intended military intervention in Libya would be aimed at maintaining the military status quo and inhibiting escalation so that Libyan factions focus on a peaceful solution that is purely national and not influenced by foreign powers.

The minister warned against the reliance on foreign parties in the conflict as that would fuel the crisis and intensify the people's suffering. He added that certain entities bring foreign mercenaries in the country and that they deal with terrorist organizations that target the innocent.

Shokry's statements came in the press conference held jointly with his Armenian counterpart in Cairo on Sunday. The minister was answering a question on the warning issued by President Abdel Fatah al-Sisi to the Libyan Government of National Accord (GNA) militias backed by Turkey on June 20 on advancing toward the cities of Sirte and Al Jufrah in central Libya.

The Libyan Armed Forces restored Sirte in January, and was advancing in the outskirts of Misrata and Tripoli. However, early in June, it lost Al Watiyah and Tarhouna, which was its last stronghold western the country, retreating into Sirte and Al Jufrah. The Libyan army installed air defense systems in Sirte, while Al Jufrah already has a main airbase.

That is because it is aligned with the UN Security Council resolutions on Libya and Berlin Conference imposing an arm embargo on Libyan factions, banning foreign intervention in the North African State, and advocating for a political solution. Furthermore, Egypt's intervention is requested by the elected Libyan House of Representatives and Libyan tribes.

On July 13, the Libyan House of Representatives issued a statement allowing the Egyptian Armed Forces to intervene whenever it perceives a threat to the security of Egypt and Libya describing Turkey as "the invading occupier."

On July 16, President Sisi met with Tribe leaders belonging to eastern, central, and western Libya in Cairo as they demanded Egypt's military support to repel Turkish aggression. "We will enter Libya upon the request of the Libyan people, and will leave it in compliance with the order of the Libyan people," the president stated.

On July 20, the Egyptian House of Representatives approved sending troops beyond Egyptian borders on the western strategic direction.

In December 2019, Turkey signed with the GNA two MoUs on defense and gas drilling in the Mediterranean.

In January, the Libyan Armed Forces restored Sirte, and was advancing in the outskirts of Misrata and Tripoli. However, early in June, it lost Al Watiyah and Tarhouna, which was its last stronghold western the country, retreating into Sirte and Al Jufrah. The Libyan army installed air defense systems in Sirte, while Al Jufrah already has a main airbase.

Libyan tribes announced the closure of oil ports and fields in January as the revenues were used by the GNA to pay militants. Early in July, the tribes declared that oil facilities would resume operations. However, the LNA announced on July 11 that such facilities would remain closed until the demands of the Libyan people on dismantling militias are fulfilled. The Libyan National Oil Corporation (NCO) announced that the value of revenues lost until present is $6.5 billion.

The LNA announced downing on July 23 a Turkish reconnaissance plane west of the Libyan city of Sirte, which is currently controlled by LNA forces.

On July 22, the LNA warned Turkey against approaching the Libyan coasts, threatening to target any hostile naval vessels in the Libyan waters.

On July 5, several "unknown aircraft" launched nine strikes against Oqba Bin Nafea Airbase located in Al Watiyah controlled by the GNA – which is an interim non-elected government that is recognized by the United Nations - and Turkey. The outcome was the destruction of Hawk air defense systems, and a Koral electronic warfare system as well as the killing of a Turkish commander, and six officers as the operations room they were in was hit.

However, Commander of Mobilization at the LNA Khaled al-Mahgoub stated on July 20 that Turkey still uses Oqba bin Nafea airbase in Al Watiyah western the country to bring in military reinforcements less than a month from losing air defense and electronic warfare systems in strikes by "unknown flights."

The LNA's commander of mobilization unveiled on July 25 that Syrian mercenaries transported by Turkey are being turned into police forces by the Ministry of Interior affiliated to the GNA.

The GNA was formed as per the 2014 Skhirat Agreement expired in 2017, and that failed to achieve its purpose, which is ending the civil war and unifying the affiliation of the country's institutions. There is another interim government that is based in Tobruk eastern Libya and that was formed by the elected Libyan House of Representatives convening in the same city instead of Benghazi given the circumstances. Benghazi currently constitutes the headquarters of the LNA.

A source at the Libyan National Army (LNA) told Al Arabiyah that the Libyan Armed Forces eliminated mid-August a terrorist cell affiliated to the Islamic State (IS) southern the country in Ghadwa town as it was preparing to target oil facilities.

A week earlier, Commander of Mobilization at the LNA Khaled al-Mahgoub told Al Arabiyah that the Islamic State is being revived in Sabratha town, which is located 70 kilometers to the west of Tripoli and 100 kilometers from Tunisia. That is because it currently houses 3,000 militants from different nationalities, particularly Tunisian. Those were brought in by Turkey, and fled from Tripoli.

Sabratha was an IS stronghold and a training camp for its elements until 2016 when the United States launched a raid against its concentrations killing 49 as a plot was underway to attack Tunisia.

A website monitoring military aircraft movements over Italy and the Mediterranean detected a Turkish transport jet that took off from Gaziantep southern Turkey and landed in Misrata city western Libya.

ItaMilRadar identified the aircraft as Lockheed C-130B (61-0963), which could be carrying Syrian mercenaries into the North African state. It is noted that Gaziantep has been used as a transit location and a training camp for Syrian militants before transported to Libya.

Spokesperson of the Libyan National Army (LNA) Ahmed al-Mesmary had stated early in July that Turkey has transported into Libya 25,000 mercenaries. Those include 17,000 Syrian militants, 2,500 Tunisians who fought in the ranks of the Islamic State (IS) in Idlib and Aleppo, and other nationalities including the Sudanese.

Turkey has also sent 2,500 – 3,000 officers and military experts to co-command the operations rooms of the Government of National Accord (GNA) militias and to pilot drones from mainly Tripoli's Mitiga Airbase. The LNA downed around 70 Turkish drones as they were targeting its concentrations.

SOHR reported on September 7 that 6,700 Syrian mercenaries transported by Turkey into Libya left for their homeland.

Those returned over batches after their contracts had ended and after they had received their payments.

Those will be deployed in the areas controlled by Turkey and its proxies in Syria, according to Sky News Arabia. Also, others are getting ready to leave Syria to Libya.

Amnesty International stated on August 26 that it had been informed that at least six Libyan demonstrators were abducted and that several others were wounded by armed men who fired live rounds as they used heavy machine-guns to disperse peaceful protesters demanding economic rights.

The organization reported that on August 23 at 7:30 "unidentified men in military camouflage clothing opened fire on the crowd [in Tripoli] without warning, using AK-style rifles and truck-mounted guns."

Witnesses told Amnestry International that they had learnt from individuals affiliated to Al Nawasi militia that the abducted individuals are in the custody of the armed group in a place located near Tarik el-Shati, a highway in Tripoli next to the sea.

In the evening of August 23, Libyan citizens had gathered in front of the headquarters of the Presidential Council before heading to Al Shohadaa Square in the capital. They protested the outage of electricity and water supply as well as the long queues at gas stations in the oil-rich country.

The protests were met with live rounds and arrests as shown in videos circulating on social media. Al Hadath reported earlier in August that demonstrations took place in Tripoli's Algeria Square.

On August 24, protests broke out in the neighboring city of Misrata two days after militias reinforcements were sent to Asabaa town located 70 kilometers to the West of Trippoli.

On August 24, Spokesperson of the Libyan National Army (LNA) Ahmed al-Mesmary stated that the GNA militias are mobilizing militants and transporting arms to attack the LNA's concentrations in Sirte.

Mesmary added that in the previous 24 hours Turkish frigates were moving toward Sirte, and that their launchers were in the attack position. He said that such military moves show that the decision in not solely in the hands of the GNA that has declared a ceasefire on August 21. The spokesperson stressed that the LNA is ready to repel any assault on its concentrations in Sirte and Al Jufrah.

The GNA said that the ceasefire should include the disarmament of Sirte and Al Jufrah, and the resumption of oil production while freezing the use of its revenues at the Central Bank of Libya until an agreement is reached. On the other hand, the House of Representatives mandated the dismantling of militias and the deportation of foreign mercenaries in order to achieve a ceasefire.

Source at the Libyan National Army (LNA) told the Middle East News Agency (MENA) that the defense ministers of Qatar and Turkey visited Prime Minister of Tripoli-based Government of National Accord (GNA) Fayez al-Sarraj on August 17.

The parties agreed that Qatar would send military consultants to assist in the commanding of the militias protecting the GNA, which is an interim non-elected government that is recognized by the United Nations. Furthermore, Turkey contemplates establishing a military base in Misrata.

On the other hand, Commander of the LNA Khalifa Haftar received on August 18 the Egyptian Chief of Military Intelligence Khaled Mgawer who delivered a message from President Abdel Fatah al-Sisi.