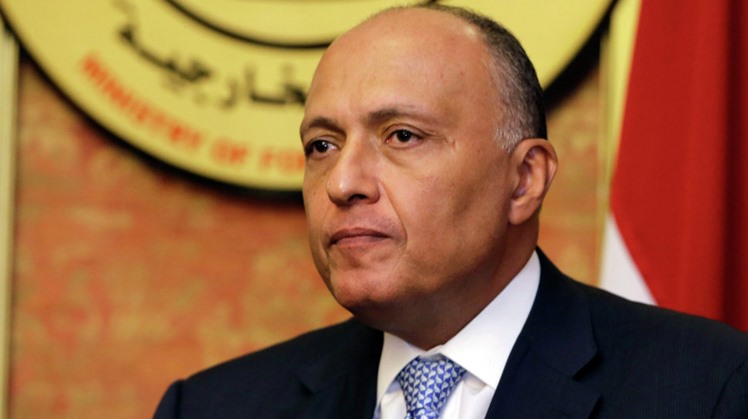 On Wednesday, Egyptian Foreign Minister Sameh Shoukry headed to the US to attend a meeting for member states of the Global Coalition to Defeat Islamic State (IS) in Washington DC, the ministry said in a statement.

The meeting of the coalition, which Egypt is part of, is held at the level of foreign ministers, foreign ministry spokesman Ahmed Hafez said.

It will discuss the role of the coalition and its efforts in fighting terrorist groups, and will evaluate the future international stance in light of the latest developments in Northeastern Syria, said Hafez.

Shoukry will separately participate in the ministerial meeting on Syria, to review the latest developments in the war-torn country and ways to promote political settlement for the current crisis and end the conflict, in an effort to preserve the Syrian national unity and the integrity and stability of its lands and people.

Egypt has been a huge supporter of the war against IS terrorist group, as it has been engaged in a war against terrorist organizations, mainly Ansar Bayt Al-Maqdes, an IS affiliate. In October, Egyptian MP Abdel Moneim Al-Eleimy suggested that the international community agrees on establishing a global fund to face and eliminate terrorism worldwide.

Egypt's Foreign Ministry earlier in October also welcomed the news about US success to eliminate IS leader Abu Bakr al-Baghdadi in a raid in Syria's Idlib, an official statement read.

The death of Baghdadi was confirmed by US President Donald Trump in a speech at the White House. Iraq and Kurdish-led Syrian Democratic Forces claim they had provided the location of the top dangerous terrorist to the US, based on intelligence information.

Hafez said that such progress highlights the need to continue to consolidate international efforts to confront all forms of terrorism, asserting that all takfiri terrorist organizations, including IS, Al-Qaeda, and Muslim Brotherhood stem from the same extremist ideological source.

The Egyptian state has labeled the Muslim Brotherhood a terrorist organization since late in 2013, after their leader, Mohamed Morsi, who served at the time as the country's president, was ousted following popular uprising, January 30 Revolution. Morsi, who ruled for only one year, died earlier this year.