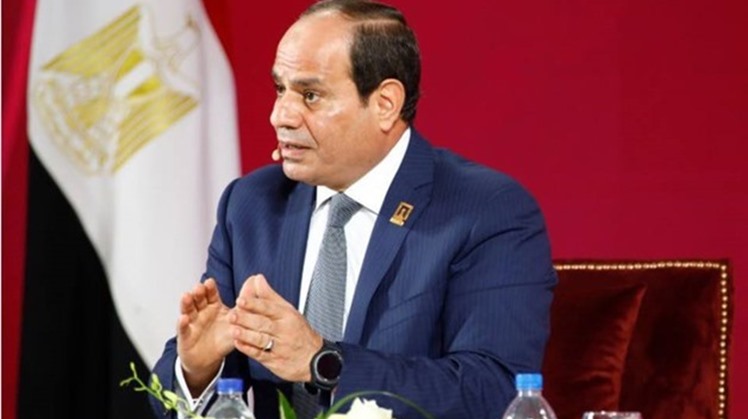 “Answering why we are buying weapons, you know that our state has never been an aggressor and has never sought to intervene in others’ affairs. Our army had to keep up with the developments that occurred over the past 20 years in the realm of arming. We achieved that [goal] but did not announce it to not convey a [unintended] message. We are a capable army. Our rank is so advanced,” the president said.

President Sisi announced that he had agreed with the Ethiopian prime minister to meet in Moscow “to discuss the matter and resolve it in a way or another.”

Responding to a question on whether the GERD crisis has reached a deadend or it will be resolved, the president explained: “We could have reached an agreement in 2011 but the events [January 25th Revolution] happened. We could have agreed on the requirements that serve the interests of both parties. It would not be a unilateral [decision]. The conclusion of the agreement would have been easy. If you are not prudent enough, the worse will come. Our army is strong and capable. In March 2015, there was a meeting with the former Sudanese and Ethiopian leaderships in khartoum and we agreed on a framework convention that is composed of 10 points. At present, you must be aware of two points of those. One is the mechanism of filling and operating the reservoir. We want such mechanism to not cause a TREMENDOUS harm to Egypt. The other point is selecting a mediator in case of failure to reach an agreement. The role of technical committees was determining the quantity of water held and the duration of reservoir filling. Over the past years, no agreement has been reached.”

The president addressed Egyptians saying, “Always, deal with the situation with calmness, balance, and wisdom. I followed responses on social media and found that people are overreacting. There are different ways to deal with each matter. The total amount of water available for us is not enough at present as that quantity was set when we were just 15 million. Now, we are hitting 100 million and we are increasing. As indicated by international standards and the United Nations, we are below the water poverty line that is 500 cubic meters per individual per annum. We set a plan in 2014 and we are accomplishing it. So far, the work accomplished is worth LE200 billion. The plan is about recycling water in three-phase treatment plants, and establishing desalination plants. Next year, the amount [spent on the execution of the plan] will rise by 70-80 billion. By 2037, the amount will be LE900 billion. Those projects are being built to secure the growth needs of our people and not to face the Ethiopian Dam crisis.”

The president added that desalination plants have been recently built in Alamein, Galala, Eatsern Port Said and Sokhna. The capacity of each is 150,000 cubic meters per day. He clarified that similar ones exist in North Sinai, South Sinai, Hurghada and Matrouh.

A question was raised on the president’s perception of the Turkish offensive on Syria and its impact on Egypt’s national security. Another question was put forward by History Professor at Ain Shams University Gamal Gaafar wondering if Egypt has plans to face attempts to remap the region like what happened after ‘Sykes Picot Treaty’ and to face regional colonial ambitions like Turkey’s new Ottomanism, Iran’s Shiite Crescent, and “the embedment of Israel in the region.”

“If the region faces many challenges or developments, we can face them by applying two principles. First, we never intervene in other states to cause harm. Egypt, whenever it disagrees with another state, never launches negative operations. On the contrary, it finds a common ground to start a dialogue,” the president said highlighting that the other principle is the unity of the Egyptian people.

“Who did that to Syria? Its people [did]. All what is needed is just fueling the situation. That prompts me to mention the fourth generation of warfare...Your phone provides so many details about you, which are collected by giant computers that carry out segmentation. Each segment has its characteristics...Some sub-segments can be targeted to cause ‘ignition’ which leads to the masses moving bringing about the end of the country. The only thing you must insist on is not harming your state’s institutions starting from the presidency institution until the smallest institution. Resort to law and constitution, if there is something,” the president elaborated.

“Given the strength of our army, no one can intervene in our country. If anyone thinks about it,” President Sisi grinned. “When we talk about a plan that persists until 2037, that means we are taking good care of ourselves not just when it comes to the water matter but also when it comes to everything. What has been [recently] accomplished would have taken up to 20-30 years to finish. Only God knows [what I did] and only God will reward me. We achieved a miracle when it comes to electricity. We can export to Europe, Africa and Asia. We are doing electricity linkage with Cyprus, Greece, Sudan, Libya, and Jordan. We are ready to fulfill their needs without any impact on our plans. Who did this? It is you. We seek to cut Nile water [supply] to the entire North Coast and Red Sea [coasts] to substitute it with desalinated water. We have already finished that part of the plan,” the president stated.

“Challenges and threats will always exist all the time because this is the nature of humans…The plot is to make you damage your country doing the work [on their behalf]… The main recommendation is the unity and steadiness of Egyptians. Any other problem can be fixed. The real challenge that faces our region’s countries, including Egypt, is the unity of their peoples and not turning against their respective states. Fragmentation and chaos achieve to others a victory without combat. We can unconsciously destroy our country. We are mortal but our country will remain for generations to come,” the president asserted.

Vice-president of Sinai University Salah Salam, who originates from Sinai, asked when the Comprehensive Operation Sinai 2018 against terrorism will conclude so as the displaced would return. Salam demanded that civilians who were killed in terror attacks are considered Armed Forces martyrs and that their families receive pensions worth the same value as families of soldiers. He also demanded that injured civilians receive medical treatment at Armed Forces hospitals as access to those establishments is granted merely to some patients after examining the conditions of all cases.

“The operation was due to last for three months. However, imposing full control upon Sinai is a long-term process that requires further cooperation from the side of Sinai dwellers. You used the term ‘displaced’ but we did not displace anybody. There were houses and farms that are so close to Gaza Strip and thousands of tunnels. To end that, we had to evacuate residents gradually a kilometer by kilometer. However, was that done without giving anything in return? [The answer is] no. We paid for each meter square of the lands and buildings so no one was displaced. That did not happen in 1967 when dwellers of Ismailiyah, Suez, and Port Said left to other governorates… Billions were paid [to not displace people]. We had to demolish the buildings and farms because that is the national security of 100 million. We are building other cities like New Rafah. We are establishing bedouin communities. There are 14 in South Sinai and 12 in North Sinai. Those communities are ready to be inhabited,” the president answered.

“When I was in New York, no terror attacks occurred in Sinai at all in order to encourage people to move [against the state]. Once it [the attempt] failed, the terror operation took place on the same day [I arrived in Egypt]. Pay attention. They are the same,” the president warned.

“For the Sinai issue to end, there must be further efforts and cooperation. You know them and live among them. We do not ask you to face them. We know it’s not your role,” the president said hinting that North Sinai dwellers have to report the location of terrorists. He also underlined the state’s eagerness to develop the peninsula saying that “the amount of expenditure in the past five years in Sinai is unprecedented.”

“Families of civilian martyrs and the injured civilians receive pensions and compensations. I will check if it is possible to pay the same amount as that paid to soldiers and their families but I cannot make a promise now,” the president said.

“The anniversary of 6th of October victory reminds us of many conclusions. The top of which are making sacrifices for our homeland, and working persistently and diligently to build it. I am confident that the mettle of Egyptian people has not changed… Another conclusion is working hard towards the goal despite obstacles,” the president said in his speech before the Q&A segment. The president affirmed he is positive that the Egyptian people will carry on with economic reforms that have been widely praised by international organizations.

“Those who do not have a national army and contemporary arms do not have security. That is why since I became minister of defense and later president, I have been eager to strengthen the capabilities of the Armed Forces as Egypt is a core country in a troubled sphere. There is no security or stability for this region without Egypt. That, who targets Egypt, wants the entire region to collapse and not just our state. Let’s work together to build a modern and contemporary state that possesses the factors of development and prosperity,” the president added.

“The development of human civilization expanded to include the concept of modern war, which consists of the concept of asymmetric warfare that is about information warfare and misleading propaganda… We should be cautious as the mechanisms implemented are disguised as calls for achieving the interest of the homeland but in reality they are evil schemes to harm Egypt and its people. Those mechanisms mainly aim for mistrust between the people and state institutions. We achieved victory in the glorious 6th of October War when we transcended limited resources for the sake of the noble objective and surpassed the machinations of haters and the schadenfreude of enemies,” the president warned.

“Always make the interest of the homeland your ultimate goal and set the suitable environment for its growth. Do not give attention to doubtness and disappointment calls that are driven by personal interests and narrow targets,” the president recommended. The chief of state stressed the importance of awareness “to build a state that prioritizes citizenship and to raise the country to the status it deserves among nations.” President Sisi asserted that building “the awareness of young generations is the responsibility of family, media, and society so they would be prepared to face challenges.”
Commenting on demands to improve services and the living conditions of people, the president pointed out that people must be aware of what is possible and what is not. He said he was asked to give in-kind subsidies worth LE1,000 to each individual but that is impossible because granting a LE10 raise for each individual would cost the budget LE8.5 billion. As for civil services, the president said the state is working on digitizing procedures in order to minimize human intervention.