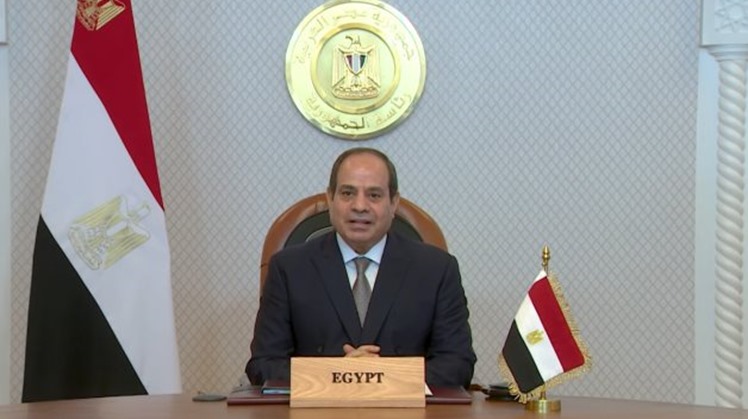 Sat, Jun. 18, 2022
CAIRO – 18 June 2022: Egypt's President Abdel Fattah El-Sisi has invited the companies partaking at St. Petersburg International Economic Forum (SPIEF) and other companies to benefit from the mega-investment opportunities in Egypt in all fields.

In a recorded speech on Friday at the 25th session of the forum, Sisi said the Egyptian government managed to advance the country’s legislative structure in order for Egypt to be able to attract more foreign investments.

This qualified Egypt to come in the first place regarding attracting foreign investment in Africa and to become one of the few countries in the world to be able to achieve a growth rate that has reached to 3.3 percent" in 2021 despite the negative challenges of the coronavirus pandemic on the global economy.

He added that the country’s non-petroleum exports also increased during 2021 to reach $32 billion and that the Egyptian economy is expected to see a growth of 5.5 percent during the current fiscal year.

Also, Egypt has managed to implement mega agricultural projects that aim to increase agricultural land by almost 2 million feddans within the framework of its strategy to leverage its capabilities.

This is in addition to the mega projects Egypt is implementing in the fields of transport by expanding thousands of kilometers of roads and upgrading Egypt’s transport system by introducing new projects, the president added.

“Despite the previously-mentioned national efforts, Egypt’s actions and efforts to achieve progress were hit recently by economic crises caused by the COVID-19 pandemic,” the president said

He added that the world has been also hit by a great economic crisis that cast a shadow over growth rates and negatively affected states’ budgets while it was partially recovering from the COVID pandemic effects and repercussions.

This has been reflected on the rise of fuel prices, decline in the value of the national currencies in the face of hard currencies, disruption in supply chains, the emergence of the food crisis, as well as the irregular movement of civil aviation, Sisi said.

“This sector is connected with vital fields of the Egyptian economy, primarily tourism and insurance,” he stated.


In light of the current global crisis, the president called for concerted international efforts and collaboration among all parties in order to get matters back to their normal state.

This especially includes returning to normal the maritime traffic, and the regularity of supply chains, particularly foodstuff, such as grain and vegetable oil, Sisi explained.

The president also highlighted the need for working toward restoring calm and stability at the international level in order to mitigate the impact of this economic crisis on the peoples, who seek peace and development.

“This year's forum is being held amid unprecedented political and economic circumstances and challenges of a strategic nature,” Sisi said.

He expressed hope that the outcomes of the forum will contribute to finding effective solutions to these challenges in a way that mitigates the impact of the global economic crisis and its negative repercussions on many countries in the world, especially the economies of emerging countries.

The president said he also hopes that the forum takes the concerns and interests of all parties into account and achieves the security and tranquility of peoples.

“This would be achieved through long-term political understandings that open the way for the growth of the global economy, especially in the wake of the severe coronavirus pandemic, which has cost our societies many victims and considerable money and resources, thus making us keen to avoid any slowdown in the global economy,” he added.

During his speech, Sisi said Egypt will be part of this year's session of the forum as a guest country, which confirms the distinguished level that the Egyptian-Russian economic relations have reached over recent years.

“Let me seize this opportunity to reiterate that the Arab Republic of Egypt values its firm and historic friendship relations with the Russian Federation and values the tangible progress the two countries’ relations have been witnessing over the past years in a multitude of vital sectors, for the two countries’ economies and the prosperity of the two peoples,” the president said.

He added that Egypt and Russia have been engaged over the past years in the implementation of mega and ambitious projects that serve the two countries and respond to the aspirations of their peoples to realize more economic progress.

The most prominent of these is the project for the establishment of the Dabaa nuclear power plant, which comes within the context of the Egyptian State’s strategy to expand in national projects for the use of new and renewable sources of energy, the president said.

He also shed light on the project to establish the Russian Industrial Zone in the Economic Zone of the Suez Canal, which is meant to become an important platform for industry in Africa.

This is, in addition to cooperation between the two countries to upgrade the Egyptian railway network and other joint ventures that realize the benefit of the two peoples, he added.

Sisi extended greetings to Russian President Vladimir Putin for his invitation for Egypt to participate in this forum as a guest of this round, wishing the forum and the participants all success and blessings and wishing friendly countries more constructive cooperation, prosperity and progress.

“We pray God Almighty to spread peace and stability across the world and to spare our peoples the scourge of war and its economic and social impact by giving priority to the language of dialogue, understanding and co-existence,” the president added.