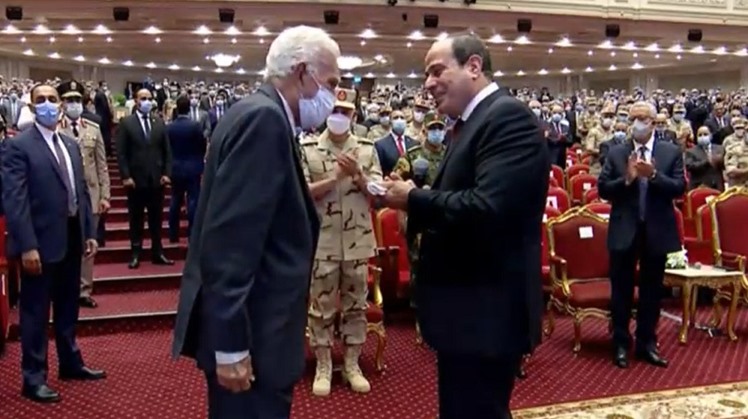 Wed, Oct. 6, 2021
CAIRO, 6 October 2021: Egypt's President Abdel-Fattah El-Sisi hailed the sacrifices made by the people of Sinai during times of war and peace, and the support they provided to the Egyptian Armed Forces against the Israeli occupation of the peninsula (1967-1981).

Sisi also pledged his continuous support for the citizens in the peninsula and his commitment to developing the entirety of Sinai, according to Ahram Online Newspaper.

The president's comments came during a cultural symposium titled ‘October 1973 - Crossing to the Future’, which was organised by the Armed Forces as part of the celebrations for the 48th anniversary of the October War victory on Wednesday.

El-Sisi began the symposium by acknowledging the contributions of Lieutenant General Abd-Rab El-Naby Hafez, the former Chief of Staff of the Egyptian Armed Forces (1981-1983) and one of the army’s commanders in the October War in 1973.

Minister Mostafa Madbouly and Minister of Defence Mohamed Zaki were among the army commanders, ministers, state officials, and media personnel who attended the event.

Egypt achieved victory in the October 1973 war against Israel, paving the way for the return of the occupied Sinai Peninsula to the homeland after a peace deal was signed with Israel.

During the symposium, Major General Samir Farag, the former head of the Army Morale Affairs Department, stressed that Egyptian soldiers shocked Israel with their bravery during the 6th of October War.

“After the October war, Israeli leaders admitted that the Egyptian soldiers they faced in 1973 were not the same soldiers of 1956 or 1967,” Farag said.

The president said he learned from Major General Farag, who was the commander of the first battalion El-Sisi served in as a young first lieutenant, that “there is no problem that cannot be solved by [being calm and taking a moment to think].”

On his part, Farag hailed El-Sisi's abilities as a young officer under his command, describing him as “a capable decision-maker.”

Farag added that the president’s “decision-making” capabilities were once again highlighted in 2013, when El-Sisi — then the country’s Minister of Defence — took the decision “to stand by the Egyptian people and oust the Muslim Brotherhood.”

Egypt’s victory during the October War eventually led to Israeli forces withdrawing from the Sinai Peninsula on 25 April, 1982 after 15 years of occupation that ended when a peace treaty was signed between Egypt and Israel in 1979.

In 1981, Tel Aviv provoked a diplomatic crisis with Cairo by refusing to hand back the Taba region in South Sinai to Egypt using false border maps.

Egyptian diplomats, historians, and legal experts managed to reclaim Taba, however, after an intense legal battle before an international judiciary to prove that the area was Egyptian territory.

Mofid Shehab, a member of the Taba National Committee and a member of its judicial defence panel before the International Court of Arbitration, was also honoured during the event today.

Shehab, a professor of international law in Cairo University, said that Egypt resorted to international arbitration to restore sovereignty over its entire territory after the glorious October War because “we were not willing to give up an inch of Egypt’s land.”

“No right has ever been lost by those who demand it, and as long as there is a will, determination, and willingness to sacrifice, [there is a way],” Shehab said.

He said the legal advisor of the Israeli team after the arbitration admitted that Israel knew Taba belongs to the Egyptian people, but that Tel Aviv did not think Egyptians can successfully prove this fact and convince the panel of the validity of their claim.

The gavel fell on the legal battle for Taba on 29 September 1988, with the International Court of Arbitration issuing its historic ruling in a public session held in Geneva, announcing the return of Taba to the Egyptian homeland.

El-Sisi thanked Shehab for his valuable efforts, saying that recalling history, including the Taba arbitration case, helps new generations learn about and appreciate such historic moments.

“The opportunity had never arisen before to thank Shehab. All thanks, appreciation, and respect to [him],” El-Sisi added.

El-Sisi also pledged continuous support for the citizens in Sinai and commitment to developing the entirety of the peninsula.

The president added that “The battle to restore Taba to Egypt was successful due to the determination, will, knowledge, and expertise of the legal committee that was formed for this purpose.

“We may have been 30 years late in developing Sinai, but — God willing — we will make up for those lost years.”

On Tuesday, El-Sisi laid wreaths at the Unknown Soldier Memorial as well as at the tombs of former presidents Gamal Abdel-Nasser and Anwar El-Sadat as part of the celebrations of the 48th anniversary of the 6 October War victory.