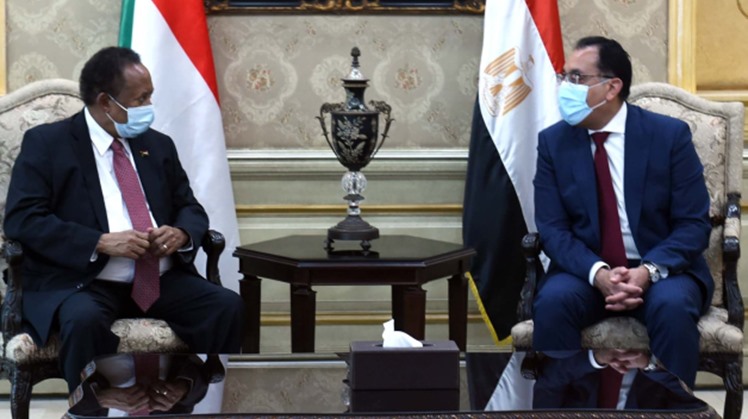 Tue, Jul. 27, 2021
CAIRO - 27 July 2020: Egypt's Prime Minister Mostafa Madbouli asserted on Monday Egypt's full support for the efforts exerted by South Sudan to achieve peace across the country, build on what has been reached through the Revitalized Peace Agreement, and proceed with implementing the agreement provisions as regards the transitional phase.


Madbouli made the remarks during a joint press conference with South Sudan's Vice President James Wani Igga in Cairo at the conclusion of the first session talks of the Egyptian-South Sudanese higher committee, which was attended by high-level ministerial delegations from the two sides.

Welcoming Igga who arrived in Cairo earlier in the day, Madbouli said the joint higher committee meeting comes in light of the keenness shown by President Abdel Fattah El Sisi and South Sudanese President Salva Kiir to propel bilateral relations at the trade and economic levels.

He added that those bilateral ties reflect long-standing bonds between the two countries, and the common history shared by their peoples, pointing out to President Sisi’s visit to Juba in November 2020.

During the meeting that brought together members of the two countries delegations, there was an emphasis on the shared will of Cairo and Juba to advance bilateral relations to the level of strategic integration; with a view to maintaining the optimal use of all investment opportunities, and achieving economic prosperity in a way that serves the interests of the two countries and their peoples, the prime minister said.

He added that the meeting probed various areas of bilateral cooperation and ways to propel them in several fields, including higher education via the scholarships offered to South Sudanese students to study in Egypt.

In the same regard, Madbouli talked about the efforts made to revive the Alexandria University’s branch in South Sudan, and ensure that Egyptian technical schools are equipped to prepare South Sudanese students to become well-qualified and skillful cadres.

The premier added that the agenda of today’s meeting also included activating projects meant to promote cooperation in the fields of infrastructure, irrigation, electricity, communications and transport.

Meanwhile, Madbouli said President Sisi has directed the government to provide emergency health aid to South Sudan, expressing the Egyptian government’s readiness to continue and activate bilateral cooperation in the health sector, particularly amid the spread of coronavirus crisis.

The prime minister said today's talks also witnessed an exchange of views on regional issues of mutual interest, which, he said, contributes to achieving security and stability in the region, as well as preserving the interests of its peoples.

On that score, Madbouli praised the efforts made by the South Sudanese leadership to engage in mediation between the Sudanese government and armed revolutionary factions, which he said have culminated in the signing of a peace agreement between the two parties last October.

The premier said he was honored to attend the signing ceremony of the peace deal in Juba.

Madbouli called on the international community to fulfill its pledges and obligations towards South Sudan in its endeavors to build a better future, noting that Egypt supports South Sudan’s efforts to lift international sanctions on the country; given Cairo’s awareness of the disadvantages of the sanctions option and its repercussions on peoples.

In this regard, he underscored the importance of lifting sanctions on South Sudan to support the ongoing transition process in the country.

Speaking at the press conference, the South Sudanese vice president expressed thanks to Prime Minister Madbouli for the warm reception, as well as to President Abdel Fattah El Sisi for what he described as a “generous invitation” to him and his country’s delegation for visiting Egypt and taking part in the important meeting of the Egyptian-South Sudanese higher committee.

James Wani Igga said he is bringing sincerest greetings and best wishes from President Salva Kiir to the government and people of Egypt.

He added that South Sudan has reaped many benefits over years from its cooperation with Egypt, which he said began in the early 1970s, especially in relation to education and scholarships.

In this regard, Igga said he feels proud of being a graduate of an Egyptian university, while today he is assuming the post of South Sudan’s vice president. He expressed hope that bilateral cooperation in the education field would not stop.

He added that South Sudan is very grateful to the Egyptian government and people for providing it with humanitarian aid, noting that his country has recently faced three crises, namely floods, locust infestation and the coronavirus pandemic.

“Egypt’s government and people have not hesitated to directly give a helping hand to our people,” Igga said.

Meanwhile, the South Sudanese official noted that preparations are under way for holding an international investment conference in Juba, adding that Egypt will be among the first countries to be invited.