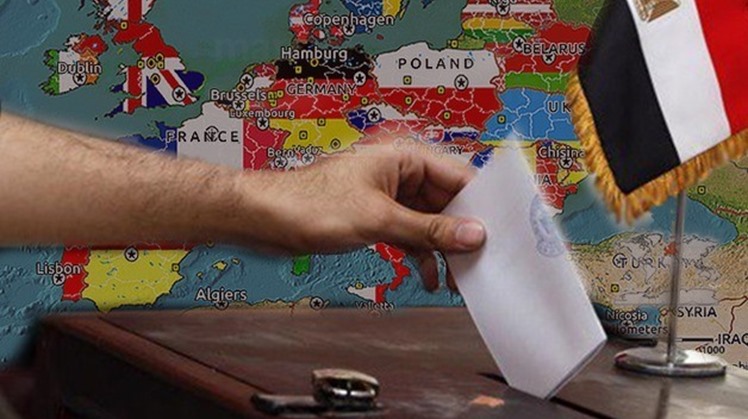 Thu, Apr. 18, 2019
CAIRO – 18 April 2019: The secondary polling stations in the headquarters of the Egyptian embassies and a number of consulates will be ready to receive voters to cast their ballot in the planned referendum on constitutional amendments starting April 19.

The Egyptian embassies abroad invited citizens to participate in the referendum.

In South Africa, the embassy called on the Egyptian community to read the constitutional amendments and then head to the polling station at the embassy to cast their votes.

In Copenhagen, the embassy stressed the secrecy of the vote, affirming that registered voters will only be able to cast their votes through their valid passports, or national IDs even if they are expired.

Also, embassies in Norway, Canada, Singapore, Belgium, Los Angeles and Riyadh called on the citizens to cast their ballots to enjoy their constitutional right.

Lasheen Ibrahim, head of the National Election Authority (NEA), called on the Egyptian expatriates to vote in the planned referendum on constitutional amendments from Friday, April 19, to Sunday, April 21.

He also announced that the public referendum for the locals inside the country will take place from Saturday, April 20 to Monday, April 22.

Ibrahim urged the citizens to accompany their children and enjoy their constitutional right, urging them to ignore the boycott calls, and to cast their ballot in polling stations nationwide.

There will be a judge to supervise each of the ballot boxes, Ibrahim said, affirming that the NEA, the body charged with managing the electoral process, is keen to ensure the transparency of the voting process.

Find below the constitutional amendments:

The House of Representatives shall consist of at least 450 members, elected through direct and secret ballot. At least quarter the number of the parliamentary seats shall be given to women.

The president of the republic shall be elected for a term of six Gregorian years, starting on the day following the expiry of his predecessor's term, and may not hold office for more than two consecutive terms.

Each of the judicial bodies or authorities shall has its own affairs, and shall be consulted concerning the draft laws regulating its affairs; each of these bodies shall have an independent budget.

The president of the republic shall appoint the heads of the judicial bodies or authorities, out of the oldest seven deputies of each of the heads, for a period of four years, or until their retirement age, whichever is earlier, and for one time throughout their terms of office, as regulated by law.

The council shall have a secretary who is appointed by the president of the republic for a period of time specified by the law.

In the absence of the president of the republic, he shall be replaced temporarily by who he authorises from among the heads of the judicial authorities.

The Public Prosecutor shall be appointed by a decision of the president of the republic out of three nominees from the Supreme Judicial Council, the deputy heads of the Court of Cassation and the heads of the courts of appeal and the assistant attorneys for a period of four years or until reaching retirement age, whichever comes first, and for once.

The State Council is an independent judicial body exclusively concerned with the adjudication of administrative disputes, disputes concerning the implementation of all its provisions, as well as the adjudication of disciplinary cases and appeals. It is the one concerned with giving opinions for the legal issues of the bodies determined by the law, revising the draft laws, the decisions that have a legislative character, the draft contracts which the law determines them and their values, and which the state or one of the public authorities are one of their parties.

The head of the board of commissioners and its members shall be appointed by a decision of the president of the republic based on the nomination of the head of the Court, and after consulting the general assembly of the court, all as prescribed by law.

The Armed Forces belong to the people, and its mission is to protect the country, preserve its security and territorial integrity, safeguard the constitution and democracy, and preserve the basic elements of the state and its civil character, the people's gains and the rights and liberties of individuals. Only the state is charged with forming these forces and it is prohibited for any person, authority, body or group to form military or paramilitary formations.

A civilian shall not be tried before a military court except for crimes that constitute an (direct was removed) attack on military installations, camps of the Armed Forces or the like, the facilities that are being protected by the Armed Forces, the military or border areas, the forces' equipment, vehicles, weapons, ammunition, documents, military secrets, its public funds, military factories, or crimes related to recruitment, or crimes that constitute a direct attack on its officers or members for the performance of their duties.

The minister of defense shall be appointed after the approval of the Supreme Council of the Armed Forces. (The last phrase was removed).

The State shall ensure that workers and peasants are properly represented in the Parliament, as specified by law.

The State shall ensure that the youth, Christians, persons with disabilities and Egyptians residing abroad are represented in an appropriate manner, as specified by law.

The provisions of the first paragraph of Article 102 shall apply as of the next legislative chapter.

The Senate is concerned with studying and proposing what it sees as a tool to consolidate democracy, support national unity, social peace, the basic values ​​of society, supreme values, rights, freedoms and public duties, and deepen and expand the democratic system.

The opinion of the Senate shall be taken as follows:

- Proposals for the amendment of one or more articles of the Constitution.

- Projects concerning the general plan for Social and Economic Development

- Treaties of reconciliation and alliance and all treaties relating to the rights of sovereignty.

- Draft laws supplementing the Constitution and others referred to Senate by the President of the Republic.

- What the President of the Republic refers to the Senate concerning the general policy of the State or its policy in Arab or foreign affairs.

The Senate shall consist of a number of members determined by law, not less than 180 members. Two-thirds of the members of the Council shall be elected by direct secret universal suffrage. The President of the Republic shall appoint the remaining third and the elections shall be held in accordance with the law.


Article (251) (Added):
A candidate for membership in the Senate or the person who appoints him must be an Egyptian with civil and political rights. He must have at least a university degree or equivalent, and his age must be less than thirty five years. The law specifies the conditions of candidacy, electoral system and the division of constituencies to take into account the equitable representation of the population and the governorates. Nomination can take place through single-member election or multi-member election, or both together.

The membership of the Senate and House of Representatives shall not be combined.


Article (253) (Added):
The Prime Minister, his deputies, ministers and other members of the government are not accountable to the Senate.