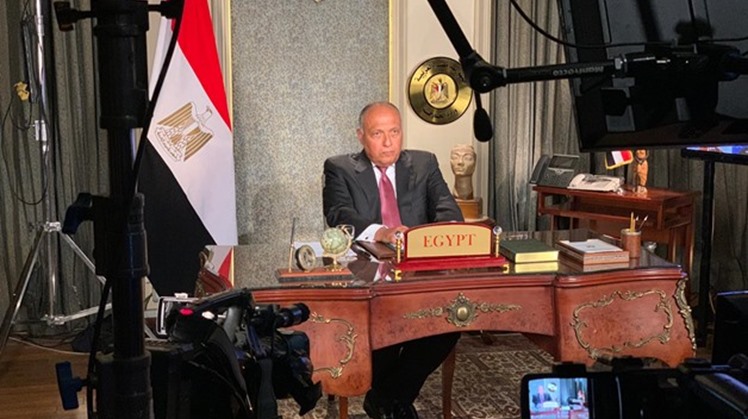 Tue, Jun. 30, 2020
CAIRO - 30 June 2020: Egypt says that the construction of the controversial Grand Ethiopia Renaissance Dam (GERD) endangered the lives of more than 150 million Egyptians and Sudanese citizens amid absences of guarantees on the safety of the Ethiopian dam on the downstream countries [Egypt and Sudan.]

In his speech at the United Nations Security Council meeting on the GERD issues at a request from Cairo on Monday, Egyptian Foreign Minister Sameh Shoukry affirmed that “the dam jeopardizes the security and presence of an entire nation by threatening its only source of life.”

He added that any unilateral action of filling the dam puts the downstream countries at risk and could fuel tension and conflicts in the region and endangers the safety of food, humanity, and environment, saying “Egypt tops the list of countries suffering from water scarcity according to international standards.”

“Regrettably, however, despite the fact that we contracted an international consultancy firm to conduct the studies on the effects and impacts of the dam, the process of undertaking these studies was obstructed, and as a result, they were never completed. Nor do we have unassailable guarantees regarding the safety and structural soundness of the GERD. This means that, in the absence of sufficient scientific data, communities downstream of this great structure, appear condemned to live in the dark shadow of a great unknown,” Shoukry said.

“This harsh reality compels us to inhabit no more than 7% of our territory along a slender strip of green and a fertile delta teeming with millions of souls, whose annual share of water is no more than 560 cubic meters, which places Egypt well below the international threshold of water scarcity,” Shoukry added.

Shoukry called upon the security council to practice its tasks to prevent such conflicts and tensions. Egypt referred this issue to the UN to avoid any escalation that could be caused by unilateral actions, he continued.

“We reaffirm our intention to reach a final agreement and call upon all African nations to seize our opportunity to achieve prosperity for people,” he said, noting that Egypt has entered in negotiations over a decade although Ethiopia started its unilateral action of building the dam.

“There should be a binding agreement that includes a mechanism of conflict resolution,” he said. Egypt joined several rounds of negotiations to reach an agreement but Ethiopia rejected the US-W-brokered agreement at the last moment.


In responding to Ethiopian ambassador to the United Nations Taye Atske Selassie Amde's comments, the Egyptian Foreign Minister said that accusations by Ethiopia to Egypt are rejected after the first in his speech accused Egypt of imposing new terms in the Washington-held discussion early this year.

“At Egypt's request, the US hosted the three countries but Egypt imposed some difficult terms. Some actions were taken by the Egyptian side amid the negotiations and they [Egyptians] have no flexibility and no intention to reach a final agreement.”

He noted that Egypt had previously taken unilateral decisions like the Toshka project in 1995, and Ethiopia objected to this project, saying “there was a unilateral step by Egypt.”

The Ethiopian ambassador also said that his country has the right to preserve and get benefits of the Nile water and that is why they are building the Renaissance dam. “We seek to produce more 15,000 megawatts of electricity and more than 65 % of Ethiopian people are living in darkness, so this project is vital for the nation. In Ethiopia, millions of people are living under the poverty line.”

“Egypt got benefits of Nile water over 100 and Aswan Reservoir water is 182 meters above sea level.”

From his part, Sudanese ambassador to the United Nations Omer Mohamed Ahmed Siddig said that reaching an agreement before filling the dam’s reservoir with water is essential to avoid damages to millions of people, saying “Sudan rejected to sign a US/WB-brokered agreement and also refused to sign an Ethiopian deal.”

“Negotiations among the three countries [Egypt, Sudan and Ethiopia] will lead to a historic agreement,” Siddig said.

Other participating countries, including the U.S, the UK, France, Germany, China, and others voiced their support to the path of the dialogue as it is the only way to find a solution to the outstanding issues.

US ambassador to UN Kelly Craft stated that the United States urges the three countries to reach a balanced and equitable agreement on the filling and operation of the dam.” We know the Nile is deeply entwined in their national identities and is critical to their histories and futures. Agreement on the GERD could expand economic opportunities, increase food security and improve energy access – transforming the region and the lives of its 250 million people. We encourage all countries to build on the substantial progress of prior negotiations.”

South African ambassador to UN Jerry Matthews Matjila said that the African Union (AU), which his country presides over this year, will find solutions and mechanisms and ensure a peaceful process regarding the outstanding issues of the GERD for the sake of the three countries.

Niger’s ambassador to the UN Abdallah Wafy stated that any escalation between the three countries is not in their interests, saying “we have to build on the previous negotiations.”

German ambassador to the UN Christoph Heusgen said that his country is sure that the negotiations would result in finding a solution. Meanwhile, China has offered to be part of the negotiations when Chinese ambassador to the UN Zhang Jun stated that his country is ready to support and participate in the constructive dialogue among the three countries.

“The three parties should continue negotiations in terms of the Declaration of the Principles and in terms of the international law. We support the AU and the UNGS efforts to find solutions to the legal outstanding issues as all parties get benefits from the Nile,” said Viet Nam’s ambassador to the UN Lê Lương Minh in his speech.

Meanwhile, Tunisia, Russian, and Estonia supported efforts of negotiations between to reach a comprehensive agreement.

The meeting convened at Egypt’s request after Ethiopia announced its unilateral step of filling and operating the dam in July without reaching a final binding agreement between the three countries and violating the Declaration of Principles signed among the three parties in 2015. Three days ago, the AU Extraordinary Bureau of the Assembly of Heads of States and Governments held a meeting to find solution to the outstanding legal and technical issues after solving more than 90% of the disputed matters via forming a committee from the three countries and AU representatives to finalize the agreement in two weeks.

Since 2014, Egypt, Ethiopia, and Sudan have entered into negotiations on the building of the dam to avoid any possible threats on the Nile downstream countries [Egypt and Sudan]. The latest round of the talks which convened early June reached a stalemate, ahead of the Ethiopian unilateral act of deciding to fill the dam’s reservoir mid-July without reaching a final agreement among the three countries.

The conflict between Egypt, Sudan, and Ethiopia dates back to May 2011 when Ethiopia started building the dam; Egypt voiced concern over its water share [55.5 billion cubic meters]. Three years later, a series of tripartite talks between the two countries along with Sudan began to reach an agreement while Ethiopia continued the dam construction.