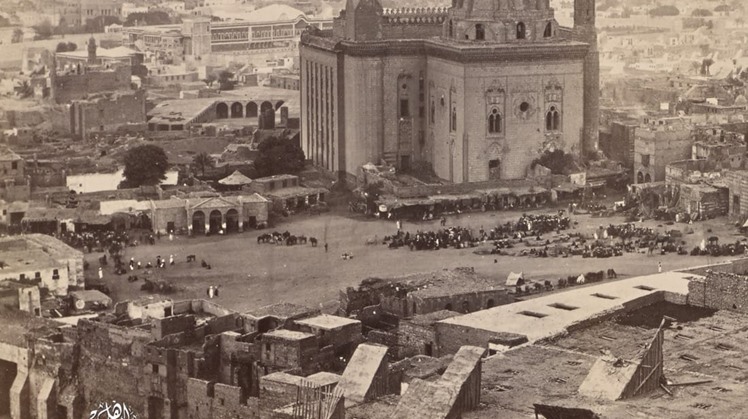 Mon, Nov. 25, 2019
The page of the people of Egypt, on social media, published a rare photograph of the castle square in Cairo in 1857, which was admired by many of the pioneers of the page.

The picture has hundreds of people and dozens of horses in the middle of the picture in the middle of the square where the horse market was held weekly to buy and sell horses.We note the presence of some shops and cafes just below the Sultan Hassan Mosque and adjacent to the mosque completely, and it was decided to remove them later in the era of Khedive Ismail to preserve the aesthetic appearance of the mosque.

We also note in the picture that it was not at that time the construction of the Rifai mosque was not started and therefore we do not find any trace, but we see the houses that existed before the construction of the mosque in the same location, and on the left of the picture we find some houses, which shows us that the castle square was a closed square On the street side of the Aisha Square, these houses were also removed during the reign of Khedive Ismail.

We find behind the Sultan Hassan Mosque show Saray El Helmeya, the residence of the governor Abbas Helmi Pasha I, was demolished in the early last century and its location is now the new neighborhood Helmeya, and a few meters to the left of Sultan Hassan Mosque there is a one-storey building with a triple gate and topped by a triangle. The building is the police department of the capital Krakon at the time and has become its site to the electricity company today, and the top of the houses show some wood panels resembling the panels of solar energy, the air craps that were used to temper the temperature in the summer.