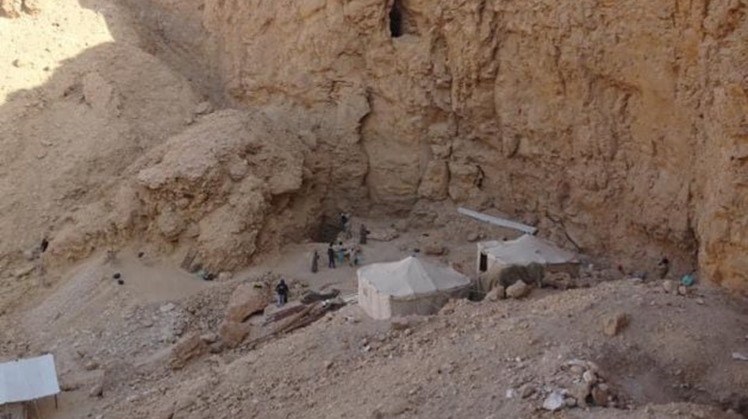 Mon, Jan. 16, 2023
The joint Egyptian-British archaeological mission from the Supreme Council of Antiquities (SCA) and the New Kingdom Research Foundation announced the discovery of royal tomb in the Western Valley of the Theban Mountain on Luxor’s West Bank.


" The ceramics and fragmentary inscriptional evidence found in the newly uncovered royal tomb indicates that it belongs yo several members of the royal family of the Thutmosid period of the 18th Dynasty," said Mostafa Waziri, Secretary General of the Supreme Council of Antiquities.

The newly uncovered royal tomb is located in Valley C which is one of the western valleys located below Neferure’s cliff-tomb.

More studies will reveal more about the secrets of this unknown tomb and its architectures and its halls, Waziri said, adding that so far only a rock cut staircase, two corridors and one partly painted chamber have been uncovered.

Piers Litherland, head of the mission from the British side, said that current studies indicate that this tomb has been badly damaged by flooding that occurred in antiquity and which has almost completely blocked the tombs and its inscriptions with debris.

"It will take many months to investigate," he added.