Ancient Egyptian writing and the Rosetta Stone.. What did Newton and Plotinus say about hieroglyphs? 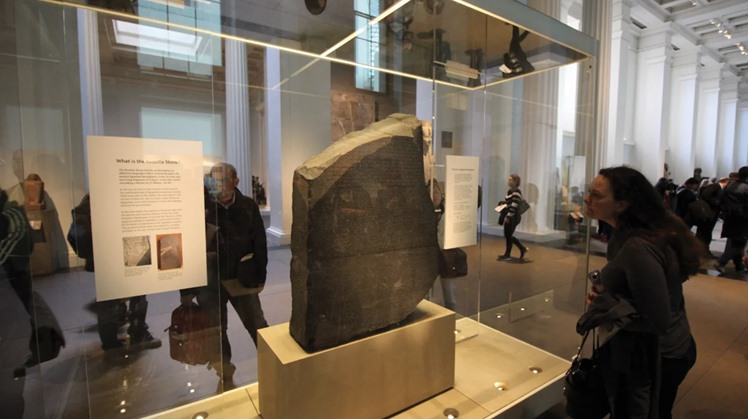 Thu, Sep. 29, 2022
For more than 40 generations, no living soul had been able to read an ancient Egyptian text until before the last known hieroglyphic inscription was carved (in August 394 CE), detailed understanding of the text faded in the Nile Valley, except for a few members of the elite and with the dwindling of specialized knowledge as well, Speculation prevailed and fanciful theories emerged about the meaning of the mysterious signs that were seen adorning Egyptian monuments.

Sponsored links by Project Agora
The cost of dental implants in 2022 will definitely surprise you!
dental implant | Search ads
Installing solar cells in Egypt is much cheaper than you think
solar panels | Search ads
As early as the first century BC, the Greek historian Diodorus Siculus asserted according to the BBC's History magazine that the hieroglyphic text "was not created from syllables to express the basic meaning but from the appearance of things drawn and their metaphorical meaning learned by heart." In other words, it was believed that hieroglyphs did not constitute an alphabet and that they were not verbal (signs representing sounds), instead historians believed that they were schemas, images with symbolic meaning.

According to the American historian and writer Edward Dolnick and his book How Did the Rosetta Stone Surrender Its Secrets? The main obstacle to any kind of attempt to interpret hieroglyphs has been the widespread belief that hieroglyphs convey profound spiritual truths, and that they cannot be easily revealed, so it is certain that no one in the world could read hieroglyphs during the nearly 1,500 years or so before the discovery of the stone. Rasheed, but that doesn't mean people weren't looking at hieroglyphs or their copies or Egyptian antiquities, or drawings of them, and thinking about what those things mean.

From the early Middle Ages through the eighteenth century, thinkers recorded their feeling that deep, and perhaps ambiguous, teachings were lurking there, in ancient Egyptian writing. According to the third-century philosopher Plotinus, Egyptian scribes were not concerned with "the whole business of letters, words, and sentences". Instead, they used signs, and Plotinus also said that each sign was "a piece of knowledge, a piece of wisdom".

In the absence of anything to oppose this rather frightening and exciting idea, it persisted even into the Age of Enlightenment, when Isaac Newton, according to the American New Yorker, firmly believed that the ancient Egyptians had solved all the mysteries of apparent nature. the other; the aim of the hieroglyphs was to conceal that knowledge from the unworthy.”