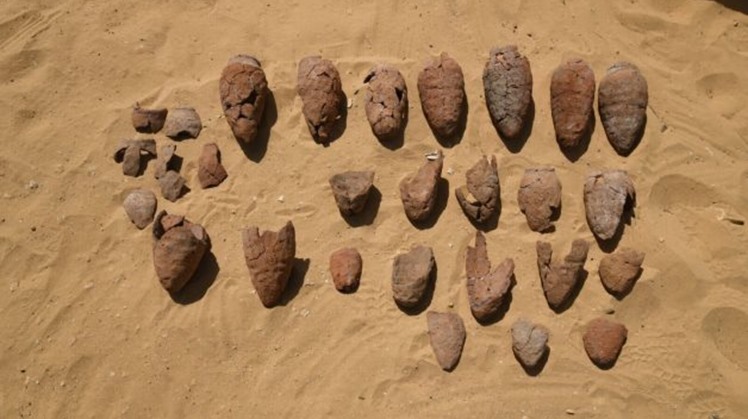 Mon, Aug. 1, 2022
The joint Italian-Polish archaeological mission working in the Temple of King Nyuserre in Abu Ghorab, north of Abu Sir, discovered the remains of a mud-brick building below the temple.

Preliminary studies indicate that it may be one of the four lost sun temples of the Fifth Dynasty known from historical sources, which has not yet been revealed.

This was stated by Secretary-General of the Supreme Council of Antiquities Mustafa Waziri, pointing out that excavations will be completed at the site to reveal more about this building.

Waziri said that the remains of the discovered building are accessed through a limestone entrance. It leads to the area between the storerooms in the north and the wide courtyard to the west, where there is a paved floor of mud bricks containing huge blocks of quartz, some with a weighted face and embedded in the floor under the floor of the Temple of King Nyuserre.

Head of the Egyptian Antiquities Sector at the Supreme Council of Antiquities Ayman Ashmawy said the remains of the discovered building indicate that it was built of mud bricks. It was partially removed by Nyuserre to build his temple.


Ashmawy pointed out that many pottery vessels were discovered at the site, which may have been used in the foundation rituals of the oldest temple, which were discovered in the northeastern corner of the interior of the Temple of the Sun and the bottom of the stone slabs of the foundations of King Nyuserre’s Temple.

For his part, Director of Saqqara Antiquities Area Mohamed Youssef said that the foundation deposits were found at the level of the mud-brick wall of the ancient temple, which consist of beer pots, meidum pots and some pots with a red edge.

Rosanna Birley, head of the expedition from the University of Naples, said that many fragments of clay seals bearing royal names were also found, including the name of a king from the Fifth Dynasty. A lot about this king is still unknown.

Birley emphasized that the new discoveries may indicate the presence of the king’s activities on this site, which may change our knowledge of the history of this king in particular and the Fifth Dynasty in general.

Massimiliano Nozolo, head of the expedition from the Polish Academy of Sciences Warsaw, confirmed that the expedition will complete its work soon, in an attempt to reveal the ancient temple, and unveil more secrets about this building.