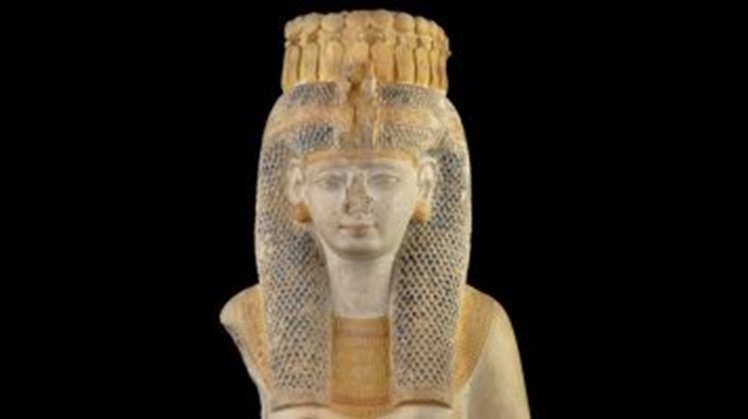 Sun, Jul. 31, 2022
Today we shed light on an archaeological piece, which is the "Statue of Mert Amun", the piece that dates back to the 19th Dynasty, the era of Ramses II, where we continuously review a piece with its image and some information about that piece and the place it is displayed at the present time.

This magnificent statue is one of the unique pieces in ancient Egyptian art, which represents Queen Merit Amun, daughter of King Ramses II and the great royal wife, although her name is missing here, but the titles and phrases are the same as on the statue of that princess "who became the great wife after The death of her mother", which is located in Akhmim.

Merit Amon wears a number of ornaments that represent the splendor of fashion and royal elegance of the nineteenth dynasty, her crown "Modeus" consists of a cobra serpent topped with sun disks, and most likely she originally had a long headdress consisting of two ostrich feathers with a sun disk over her head, and adorns her forehead. A cobra, one wearing the crown of Upper Egypt and the other wearing the crown of Lower Egypt.
Her wig reveals her ears adorned with round gold earrings, and she also appears wearing a wide complex necklace consisting of five rows of beads in the form of the hieroglyphic "nefer" sign, meaning "beauty." The statue is displayed in the Hurghada Museum.

And the Hurghada Museum, which was opened on February 29, 2020, and is the first archaeological museum in the Red Sea Governorate to be established in partnership with the private sector, and it is located near the tourist walkway and Hurghada International Airport. for the museum building.

The number of the museum’s exhibits is about 1,200 pieces, shedding light on the aspects of beauty and luxury in the life of the ancient Egyptian in various eras, starting from pre-dynastic times to the upper dynasty, passing through periods of ancient Egyptian history, the Greek and Roman eras, the Coptic and Islamic eras.