Memory of the Day: A study published by the scientific journal Nature revealed the discovery of a huge cavity in the Great Pyramid of Khufu. 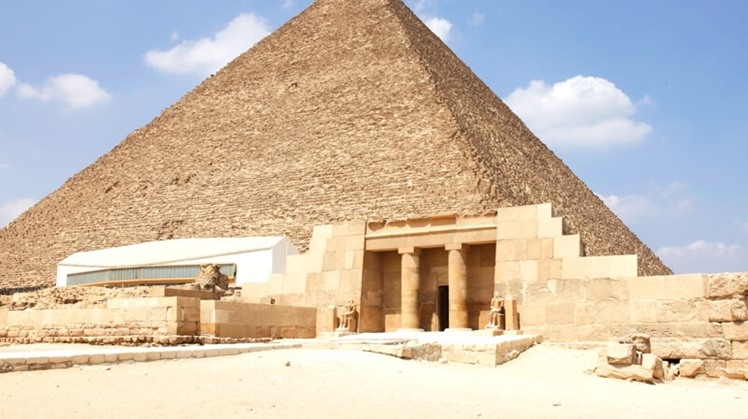 Thu, Nov. 4, 2021
On this day, November 2, 2017, a recent study published by the scientific journal Nature revealed the discovery of a huge cavity in the Great Pyramid of Khufu, 30 meters long. For this reason, we will review the history of the pyramid in the following lines.

The Great Pyramid, or better known as the Pyramid of King Khufu (2589-2566 BC), with its original height of 146.5 m, was the tallest building in the world for 3800 years, and it is still one of the Seven Wonders of the Ancient World that remains until now. It took 10 to 20 years to build the pyramid. To this day, we have no confirmed information about how the Great Pyramid was built.

The Great Pyramid was built of local limestone, while in the past it was completely covered with a high-quality limestone cladding. Burial chambers, one of which is cut under the lower rock, and two at a height inside the building itself, something unique to the pyramid of Khufu that no other pyramid has. The visitor can see the sarcophagus in which King Khufu was lying in the upper chamber known as the King's Chamber. This chamber can be accessed through the Great Hall, a corridor with a grandiose tiered ceiling, considered a masterpiece of ancient architecture.

Two large, dismantled boats were discovered in pits on the southern side of the Great Pyramid, which were believed to have been used to transport the king's mummy and funerary furniture to the pyramid. The eastern boat has been reconstructed, and it is displayed in the Khufu Boat Museum next to the pyramid and built above the pit in which it was found.