"The Lives of the Egyptians" The History of Agriculture in the Ancient Egyptian Civilization.. According to Herodotus 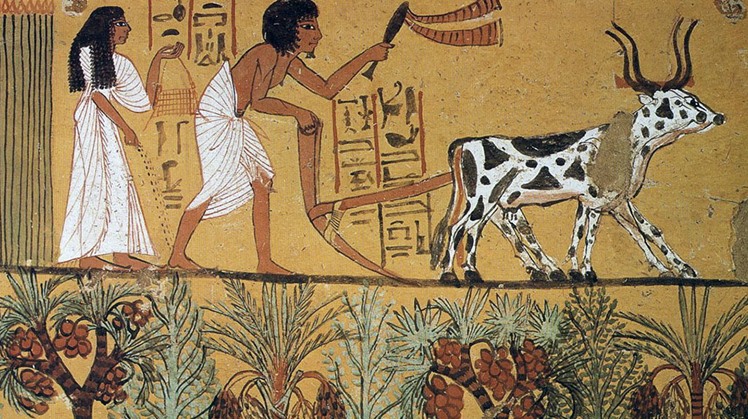 Mon, Sep. 13, 2021
We continue the series "The Lives of the Egyptians" with Will Durant's Encyclopedia of Civilization Story, and we stop today at his talk about agriculture in the history of the ancient Egyptians, especially since Egypt is an agricultural country from beginning to end.

Will Durant says under "Agriculture":
Behind these kings and queens were unknown pawns, and behind those temples, palaces and pyramids were city workers and field farmers. Herodotus describes them as he found them around 450 BC. A description that prevails in a spirit of optimism, saying: “They reap the fruits of the earth with less effort than other peoples, because they do not have to break the grooves of the earth with a plow or hoe it, or do something like what other people are forced to do With it in order to reap from it a crop of love, because if the river overflows from itself and irrigates their fields, then its shelter recedes from it after watering it, every man plants his land and shoots it with his pigs. ...collect the crop."

And as the pigs trampled love with their feet, so were the monkeys acquainted and trained to pick fruits from the trees, and the Nile, which irrigated the land, carried large quantities of fish to them during its flood, leaving them in shallow areas, and the net in which the fish was caught was the eye that surrounded its head during the night In order to protect him from the evil of mosquito bites, he was not the one who benefits from the generosity of the river, because every acre of land was owned by Pharaoh and no other people could do it without his permission, and every farmer had to pay him an annual tax in kind ranging from Between one-tenth of the crop and one-fifth. Feudal lords and other wealthy people owned large tracts of land. We can imagine the extent of their possessions if we know that one of them owned one thousand five hundred cows, and grains, fish and meat were the most important foods. Animal and bird, forty-eight kinds of roast, and twenty-four kinds of drink. The rich swallowed their food with wine, and the poor with fermented barley.