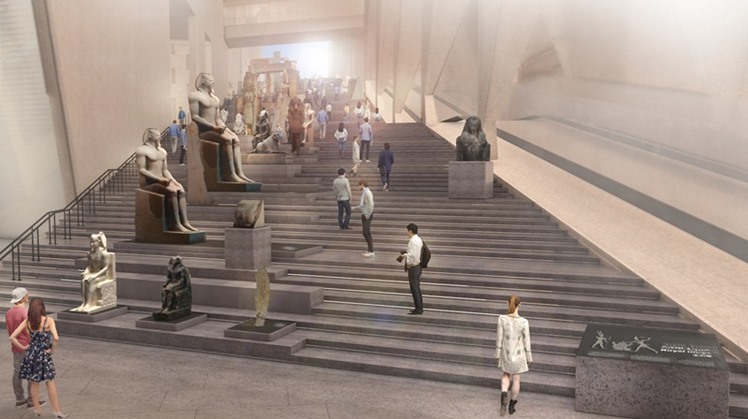 Mon, Sep. 13, 2021
President Abdel-Fattah El-Sisi directed, during his meeting yesterday, with Dr. Mostafa Madbouly, Prime Minister, to take into account the exit of the equipment of the Grand Egyptian Museum, to the fullest and highest level, and to scrutinize all details related to the museum display in a way that highlights the uniqueness and nobility of the ancient Egyptian civilization, and is consistent with With the value of the museum, which enjoys great global attention as a cultural icon of all humanity, as the whole world awaits the opening of the Grand Egyptian Museum, which will display more than 50,000 artifacts that include all the holdings of the Golden King Tutankhamun for the first time in full in front of the public, in addition to visitors watching a group of Presentations for the first time, such as the Great Staircase, the Second Khufu Boat, the Hanging Obelisk, and many others, and therefore we review them in the next report.


The first field for a hanging obelisk in the world will be in the Grand Egyptian Museum. The hanging obelisk shows the ingenuity of the ancient Egyptian in designing and sculpting ancient antiquities. It is a new innovation that is being prepared for drawings. It is located in the main entrance, an area of ​​7 acres, and this is the first time that it takes place in purely Egyptian hands and purely Egyptian design.

Through the design, Major General Atef Moftah was keen to take into account the accuracy in the archaeological, engineering and technical aspects of the obelisk that will be erected in the Grand Egyptian Museum in the outer hall, which has an area of ​​about 28 thousand square meters. The obelisk hull, which has been out of sight for nearly 3,500 years, and through the design, the visitor to the obelisk square can enter the base of the obelisk to see the archaeological base below, and looking up, the cartouche of King Ramses II can be seen in an eye-catching panorama.


The main message of the Great Staircase in the Grand Egyptian Museum will serve as an introduction to the museum, and will focus on the various powers of the king and is called Zone 1, and the lobby will contain the visual expression of the essence of the theme of kingship with a main theme, a huge statue of King Ramses II, where the king was head of government, commander of the army And the chief priest of all the gods in every temple, the king was also the mediator between the gods and the people of Egypt, and his presence was a link between heaven and earth and the souls of the dead.

The Great Staircase focuses on two themes, the royal portrait, and the gods and kings, and is divided into four sections. The first section will deal with how the king was represented in the three-dimensional sculptures. Many of these objects are large, impressive statues while others will be smaller and with more Details These exhibits will spread in history from the era of the Old Kingdom until the Roman era, while the second section focuses on the status of the goddess, and this will include the representation of the kings during their participation in religious rituals and offering offerings to the gods, and this will be displayed in addition to the pillars, columns and other distinctive elements of the temples that It was built for the gods commissioned by the king, and varies between the ancient, middle and modern states.


Visitors to the Grand Egyptian Museum will see the restoration work of the second Khufu boat in action, during their visit to the museum, as the assembly work of the boat did not take place before the opening of the Grand Museum, because it will take a long time to assemble, and the work of assembling and restoring the second Khufu boat takes nearly 3 years until They are being completed, due to the poor condition of the wood that was extracted from the pit, the composite, which was done in cooperation with the Japanese grant, in which 1,700 pieces of wood were extracted.


The holdings of the Golden King Tutankhamun, which exceed 5,000 artifacts, are displayed on an area of ​​7,000 square meters, for the first time to the public.