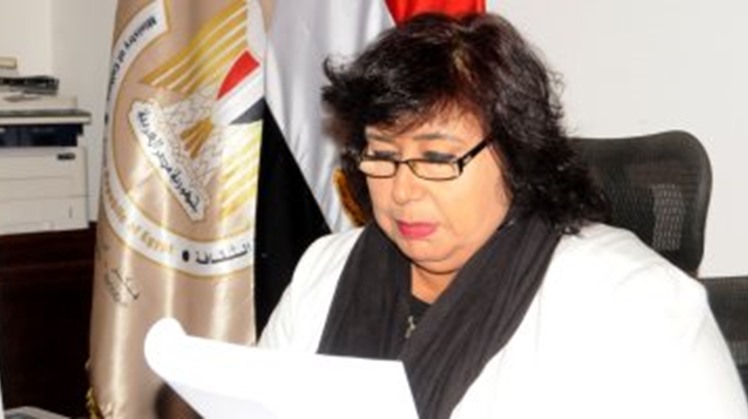 Mon, Jun. 7, 2021
The artist, Dr. Enas Abdel Dayem, Minister of Culture, followed the activities of the Egyptian Opera House headed by Dr. Magdy Saber, and she has starred in the recent period, and the number of performances during the artistic season 2020-2021 reached 872 various artistic and cultural activities.

The events included 138 on the Grand Theatre, 138 on the Small Theatre, 108 on the Gomhouria Theater, 109 on Sayed Darwish Theater (Alexandria Opera), 55 on the Open Theatre, 74 at Damanhour Opera Theatre, 77 at the Arab Music Institute, in addition to 43 concerts hosted by the Nafoura Theater, which was held It was built specifically as part of the Ministry of Culture’s plans to overcome the Covid-19 pandemic and witnessed a wide public turnout, 29 concerts for the 29th Arab Music Festival, in addition to 30 cultural salons and poetry evenings, and 53 plastic arts exhibitions, including 28 in the “Salah Taher” Fine Arts Hall, 25 in Ziad Bakir Hall. in the music library

The Egyptian Opera House participated in the Ministry of Culture project for mobile theaters, which roamed Egypt with 18 concerts. It also performed the opening ceremony of Port Said, the Egyptian capital of culture, with the preparation of a special program to continue until the end of this event.

The Opera House succeeded in hosting a number of performances from foreign and Arab countries, including Austria, Chile, Russia, the Philippines, Pakistan, Palestine, Syria and Tunisia.

The Cairo Symphony Orchestra, in its 62nd season, under the supervision of the artistic director and main conductor, Maestro Ahmed Al-Saeedy, presented 31 different concerts on various opera theaters, including a group of the most famous classical musical compositions in the world, in addition to the works of Egyptian authors that belong to the classical moulds.

The Cairo Opera Troupe, under the supervision of its artistic director, Dr. Iman Mostafa, starred in 19 concerts that included a variety of excerpts from the most famous classical operas and international songs, in addition to two operas, Aida and the masquerade party, and all the singers of the band participated in the Christmas and New Year celebrations.

The audience enjoyed the performances of the Cairo Opera Ballet Troupe, which numbered 9: Don Quixote, The Nutcracker, Dances We Meet, Oriental Steps, Romeo and Juliet, Zorba, The Big Night, Osiris and Lurkana.

The Modern Theatrical Dance Troupe, under the supervision of its artistic director, Walid Aouni, enjoyed 4 distinguished performances, namely Serena, the mermaid, deeper than it appears on the surface, Deville 19 and Akhenaten, the dust of light.

The Fursan Al Sharq Heritage Troupe, under the supervision of its artistic director, Dr. Essam Ezzat, presented its new production, Isis Al Sharq, and the folklore and eras show was re-presented.

As for the Cairo Opera Orchestra, under the supervision of the artistic director, Maestro Nayer Nagy, he gave 40 concerts, during which he participated in the performances of the opera and ballet troupe.

The Technical House of Music, Opera and Ballet, headed by Dr. Khaled Dagher, also supervised the establishment of 145 music and lyrical recitals for a group of Egyptian artists, musicians and bands in Cairo, Alexandria and Damanhour.

Within the framework of the Egyptian Opera House’s interest in reviving the Arab musical heritage and preserving it from extinction, a series of Wahhabiyat and Kalthomiat concerts continued, and a periodical series was also created for the compositions of the musician Mohamed El Mougy and the musician Baligh Hamdi. The Arab music groups affiliated with the opera also succeeded in presenting 109 concerts, including 21 for the Abdel Halim Nouira band for Arab music. 37 of the Arab National Music Ensemble, 16 concerts of the Arab Heritage Music Ensemble, 23 of the Alexandria Opera Troupe for Arab Music and Singing, 12 concerts of the Religious Chanting Ensemble, and these concerts witnessed the commemoration of the symbols and flags of melody and word in Egypt and the Arab world and the celebration of the neighborhoods of them, where each of them was honored. The musician Farouk Al-Sharnoubi, the musician Muhammad Ali Suleiman and the poet Gamal Bakhit beside the nights of the 29th session of the Arab Music Festival and Conference, which was hosted by the Nafoura Theater and was held for the first time outside the borders of the Grand Theatre, along with other opera theaters in Cairo, Alexandria and Damanhour and included 29 musical and musical concerts with the participation of 93 artists from the stars of 5 countries Arab Jordan, Lebanon, Iraq, Tunisia and Egypt, including 81 singers.

During this season, the Ramadan nights featured concerts by the most famous singing stars, amounting to 14 distinct musical and lyrical evenings for a group of bands and stars of music and singing in Egypt, including Mohamed Mounir, The Big Night Show for Talent Development Center Students, Military Music Orchestra, Medhat Saleh, Dina El Wedidi, Nouran Abu Talib , vocalist Yassin Tohamy, Tunisian Ghalia Ben Ali and the Hadra Ensemble for Sufi chanting, who presented two additional performances on Sayed Darwish Theater “Alexandria Opera” in addition to evenings for 3 Arab and Islamic countries: Pakistan, Palestine and the Philippines, where each country presented its musical and lyrical heritage with examples of customs and the traditions that characterize it.

The opera continued to organize its cultural activity on its theaters in Cairo, Alexandria and Damanhour to achieve its enlightenment goals that aim to present visions and intellectual issues. It held 30 cultural salons, poetry evenings and intellectual meetings, the most prominent of which were Cairo, Al-Moez, and Palestine. It also hosted many great poets, including Dr. Ahmed Taymour, Abdullah Hassan Jamal Bakhit, along with the celebration of International Women's Day and the commemoration of the departure of poet Hussein El-Sayed and artist Mohamed Fawzy.