Packaging begins for transportation to the Grand Museum .. What is the story of the second Khufu boat? 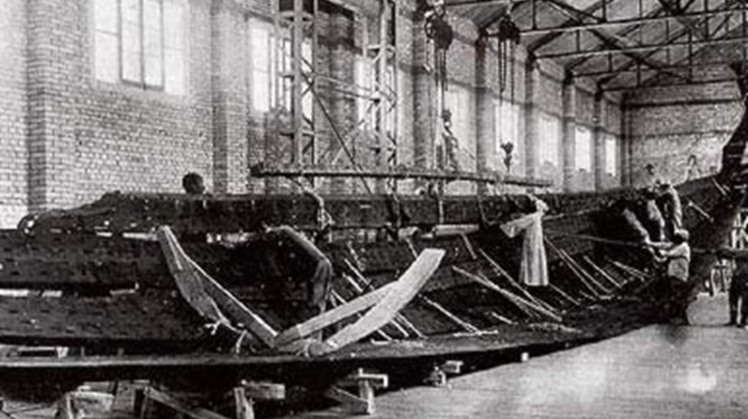 Sun, May. 2, 2021
The Ministry of Tourism and Antiquities has begun packaging the first Khufu boat, in preparation for its transfer to the Great Egyptian Museum, where it will be displayed inside a unique building befitting the grandeur of King Khufu attached to the Grand Museum, and includes the first and second Khufu boat, so what is the history of the first Khufu boat, which is one of the most important discoveries of the century The twentieth?

The story of the boat goes back to May 26, 1954, when the engineer Kamal Al-Malakh announced a discovery that is one of the most important and unique discoveries of King Khufu's relics, which is the discovery of two pits for the boats of King Khufu (2551-2528 BC) located south of his largest pyramid and in the eastern side of Specifically, its southern rib, and this discovery brought about a global storm of interest that amazed El Al, which was called the boat of the sun, and Kamal Al Malakh and Ahmed Youssef worked on discovering, restoring and reconstructing the first boat, which came out to light after it stayed in the ground for nearly 5,000 years.

When Kamal al-Malakh was carrying out cleaning and debris removal work in the south of the Great Pyramid, he revealed two pits for two boats covered with blocks of fine limestone, and that the Great Pyramid has three other pits carved into the natural rock of the Giza Plateau that take the form of boats on the eastern side of the pyramid, two of which are located in the side The southern and northern sides of the mortuary temple, while the third pit is located north of the ascending road of the Great Pyramid.

Dr. Hussein Abdel-Basir, Director of the Museum of Antiquities of the Library of Alexandria, explained that in the first hole located southeast of the Great Pyramid, Kamal Al-Malakh found on its surface forty-one huge masses of fine limestone imported from the royal quarries of Tora, and inside this hole of about 31 length , 2 meters wide, 2.6 meters wide, and 3.5 meters deep, a large wooden boat was found disassembled into about 1224 wooden pieces of cedar wood coming from Lebanon, placed with great care in 13 layers in their original places, of different lengths between 23 meters and 10 cm, in addition to large quantities. Of ropes and mats, and its paddles.

This boat was restored by the able Egyptian restorer Haji Ahmed Youssef and returned to what it was in the days of the Pharaohs. It is now displayed in his own museum above the pit in which he was discovered, and it bears the name "Khufu Boat Museum". The length of the boat is 43.4 m, its maximum width is 5.9 m, its depth is 1.78 m, the height of its papyrus shaped nose is 6 m, the height of its stern is 7 m, and it has ten oars: five on each side, with lengths ranging between 6.5 and 8.5 m, and a main cabin It is preceded by the captain's cabin at the front of the boat, and the rudder is two large oars, and the boat weighs about 45 tons.

Not a single metal nail was used in the manufacture of this compound, as the ancient Egyptian used here the "lover and adored" method and ropes to form parts of this large-sized compound.