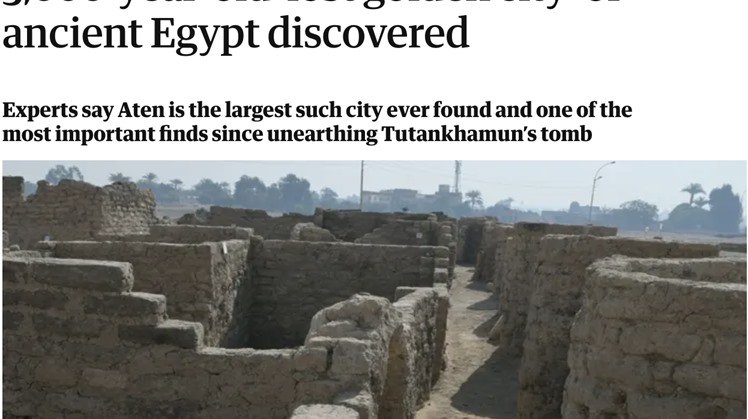 Sun, Apr. 11, 2021
The British Guardian site, and the ancient-origins site, shed light on the lost city of Luxor which dates back to the reign of Amenhotep III, and is called "The Ascension of Aton". The city continued to be used by Tutankhamun ie 3000 years ago.

Dr. Zahi Hawass said that work began in this area to search for the funerary temple of King Tutankhamun, because the temples of "Horemheb" and "Ay" had been found before.

Hawass confirmed that the mission found the largest archaeological city ever in Egypt, which was founded by one of the greatest rulers of Egypt, King "Amenhotep III", the ninth king of the eighteenth dynasty, who ruled Egypt from 1391 until 1353 BC. His son and heir to the throne, Amenhotep, shared with him. The fourth, "Akhenaten", the last eight years of his reign.

Hawass added that this city was the largest administrative and industrial settlement in the era of the Egyptian Empire on the West Bank of Luxor, where houses were found in the city, some of which were about 3 meters high and divided into streets. The city is part of our city. "

Excavations began in September 2020, and within weeks, mud brick formations began to appear in all directions, and the mission was astonished when they discovered that the site is a large city in a good condition of preservation, with almost complete walls, and rooms full of tools of daily life. Archaeological layers have remained intact for thousands of years, and the ancient inhabitants left them as if they were yesterday.