Sun symbol .. What is the secret behind the "crystal plates" at the ceremony of the parade of royal mummies 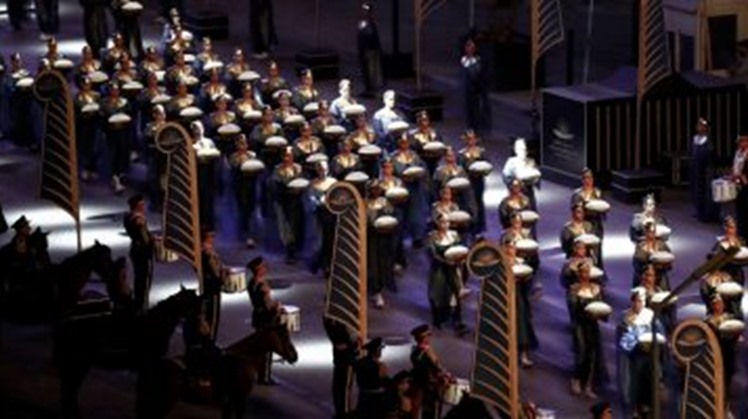 Tue, Apr. 6, 2021
In a legendary ceremony, Egypt dazzled the world with the celebration of the procession of royal mummies from the Egyptian Museum in Tahrir to the National Museum of Egyptian Civilization in Fustat, to transfer the mummy of 22 queens and kings of ancient Egypt, and the opening of the central exhibition hall in the museum, which is the most recent ancient Egyptian museum.

The ceremony witnessed a large number of spectacular movements that dazzled everyone, among them the appearance of some people carrying things in their hands that were very similar to the crystal dishes, as it was a representation of the sun disk Ra, which radiates its light to illuminate the darkness, and that is the reason for its appearance like a luminous crystal.

The ancient people used it an important belief that it illuminates the way in front of the procession of kings as a symbol of the light of the sun shining over Egypt, as it is a symbolic sign that the Egyptian civilization illuminates the world with the genius of the ancient Egyptians.

The worship of the sun was represented as a deity or one of the deities of the sky, and it was often seen as a source of strength and energy, so the Pharaohs believed that the god Ra, the god of the sun and the sky, was the creator of all living things. He created all creatures by summoning them with their secret names, but he created man from his tears and his sweat. Therefore, the Pharaohs called themselves “a herd or anam of Ra”, and he attended all the stages of the pharaohs, and Ra united later, according to the pharaonic creed, with the most famous ancient Egyptian gods “Amun”, the oldest and most influential and influential of them, which is referred to as the hidden and invisible , And that he created himself by himself, as well as a patron of the poor and needy, and appears in the Pharaonic inscriptions in the form of a human wearing a hat made of ostrich feathers.