Which king will undergo the examinations and studies after Seqnun Ra? 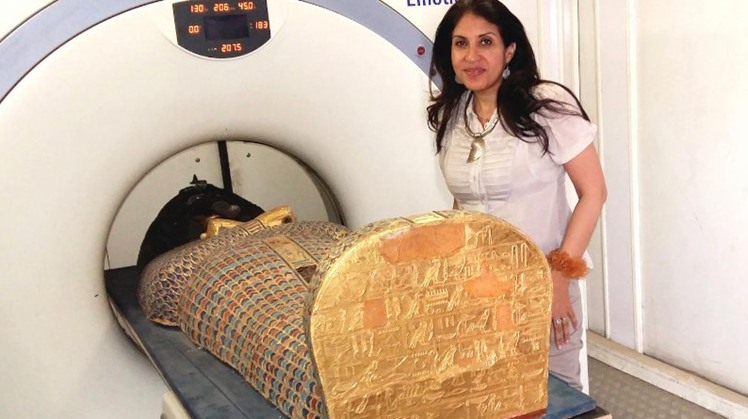 Sun, Feb. 21, 2021
Dr. Sahar Selim, an expert on scanning pharaonic mummies, and a professor of radiology at the Faculty of Medicine, Cairo University, revealed that the work of the study is continuing on the royal mummies, and another mummy will be examined, which may be the next mummy "Ramses VI" or "Siptah", and there are a number of other mummies. Which follows its own results, but after it was published in scientific journals, as happened with King Seknen Ra, where the results of the examination were announced after their publication in the scientific refereed journal.

An expert on scanning pharaonic mummies and a professor of radiology at the Faculty of Medicine, Cairo University, explained in a special interview for "The Seventh Day", which will be published later, that studies on royal mummies are a kind of honor for them, to find out how their lives were and what the reason for their departure. Each mummy is important and each A piece of information we know about them is to repeat their neighborhoods by mentioning them.

Dr. Sahar Selim indicated that what was done on the mummies is part of the royal mummies project, which is a large project that began in 2015 with examining the mummy of King Tutankhamun with a CT scan, and it was followed by different stages to examine all royal mummies, and the first part of the project we examined about 25 royal mummies such as Ramses the Second and Seti the First ", and this was published in a scientific research and book jointly with Dr. Zahi Hawass, and this book received international awards.

Dr. Sahar Selim added, as for the second part of the project, it examined 15 other royal mummies and that was in May 2019, before they were transferred from the Egyptian Museum in Tahrir to the National Museum of Civilization, and at the top of the list was King Sqnen Ra, and the mummy of the king, Sqnen Ra. Very important, since since it was discovered in 1881AD, in the cache of Deir el-Bahari, and the bandages were removed from the face and the wraps, everyone was surprised by the strikes and stabs in the mummy in the king's head, and since history did not mention anything about whether he was killed or subjected to war, especially He was a contemporary of the Hyksos, so this mummy was extremely important to be examined by x-rays so that it could tell us what history did not tell us.