Not only the face of Ramses ... other places perpendicular to the sun, most notably the Temple of Hatshepsut 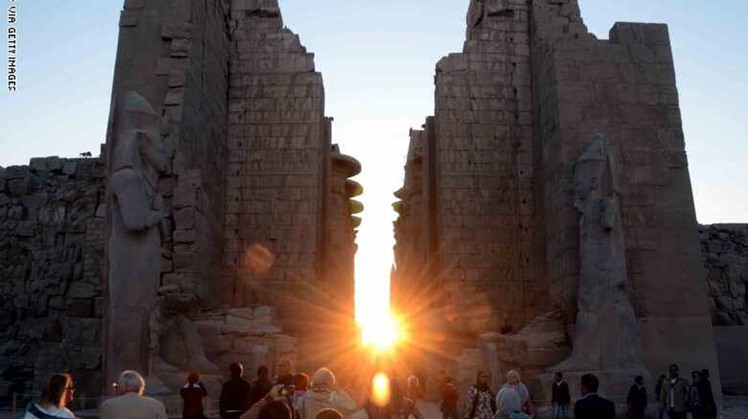 Sun, Oct. 25, 2020
eir el-Bahari temple, the most important temples of Queen Hatshepsut, located on the western mainland in Luxor, in order to monitor the phenomenon of perpendicularity at a different angle from its perpendicular to the Holy of Holies at Karnak.

And it was not on December 21 of each year, the only day on which the sun visited the historical temple, a witness to the history of Hatshepsut, the most powerful Pharaonic queen in the history of ancient Egypt, but at the beginning of the same month, specifically on December 8, the sun's rays perpendicular to the shrine of the most sacred of Amun Ra inside Deir al-Bahri, and according to annual observations of the phenomenon, the orthodoxy continues for 10 consecutive minutes.

On October 22nd and February 22nd each year, the sun perpendicularly to the face of the statue of King Ramses II, the greatest king of ancient Egypt, with his great temple, Abu Simbel, located in the city of Aswan in southern Egypt.

And every year, tourists are keen to come to watch this cosmic phenomenon amid continuous celebrations, in which the sun’s rays enter and perpendicular to the middle of the king’s face who ruled Egypt for more than 60 years, at the same date and time each year, and through historical writings and scientific observations, these are considered The phenomenon is one of the most indicative phenomena that refer to the greatness of the ancient Egyptians in determining the perpendicularity of the sun on the two days of Ramses II's accession to the throne October 22, and his birth day February 22.

This natural phenomenon extended to the temple of "Dendera" in Qena governorate, to the occurrence of the phenomenon perpendicular to the sun on the chapel of the divine birth house in the temple of Dendera, and every year on February 4 and November 8, hundreds of tourists watch the pharaohs reverence for science, with the perpendicularity of the sun on the feast of the god Horus.

Inside the Holy Quds of the ancient Temple of Hibs, located in the New Valley, the sun's rays fall perpendicular to it on the 6th of September and the 7th of April annually, to show the accuracy of the Pharaohs in building and constructing these holy temples, and their genius in revering the gods and holy places.

The construction of the Abu al-Houl statue to the east was not a mere coincidence, but rather the ancient Egyptian wanted to control the identification of the rest of the year, as a warning for the beginning of the spring and autumn seasons, when the cosmic phenomenon occurs with the sun perpendicular to the statue of Abu al-Houl on March 21 and September 23 of each year ....