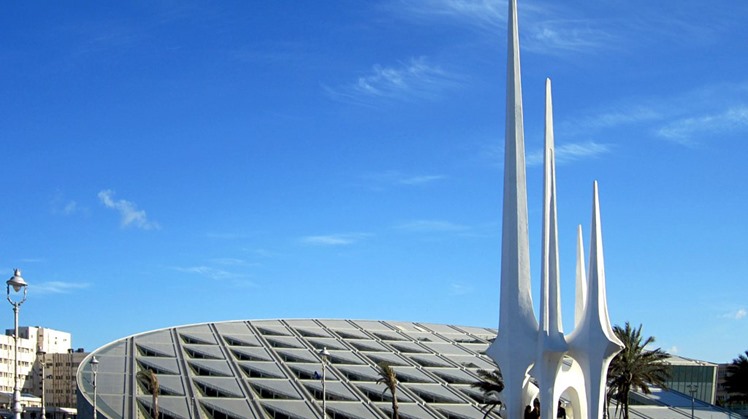 Sun, Oct. 18, 2020
On October 16, 2002, the Bibliotheca Alexandrina was inaugurated at a cost of more than 220 million dollars, with the participation of a large number of kings and heads of delegations from countries around the world, and the official ceremony began at that time at 6 pm Cairo time.


At the opening ceremony, the Nigerian writer, who won the Nobel Prize in Literature, Wal Sonica, gave a speech in which he expressed his happiness for his participation in this most important cultural event that mixes history and modern civilization, and confirmed to the French Press Agency that he supports the presence of all kinds of books in the library, while the writer Naguib Mahfouz is absent. One of the council's secretaries reported the ceremony, and the Egyptian Minister of Culture Farouk Hosni delivered a speech on his behalf.

The writers and thinkers, the guests of Egypt, continued their words in which they praised this great cultural edifice, and praised the wonderful architecture of the library and demanded that the voice of reason be heard and that the voice of science and scholars be launched and said that the Library of Alexandria is the torch that dispels darkness.

The design of the Library of Alexandria came in the form of a sun disk rising from the sea to the horizon in a circle of glass that turns the surface of the library one whole, with sunlight to the roof of the public library, which begins in the Philosophy Hall at the lowest levels of the sun disk as it rises from the sea to the Digital Science Hall at the highest levels of the disk Which rises on graceful columns of marble in the shape of a lotus flower and falls in length and height until it reaches the level of the tenth floor, where there are thinkers 'and researchers' silos in which the researcher can be free to study, relying on the library's references, which includes 250 thousand books in various branches of knowledge.

The library, which was built in the same old location in the royal quarter, "Procium," which used to include the museum, the library, the famous Alexandria lighthouse and the funerary temple in which Alexander the Great was buried, includes 5 research institutes, a planetarium, a center for international scientific conferences, and a pedestrian flyover that connects it to the University of Alexandria.

The walls of the building were covered from the outside with a layer of Aswan granite engraved with alphabetic symbols and letters representing the languages ​​of different civilizations, which clearly expresses what they represent as a link between Egypt's heritage and the civilizations of the whole world.


The library is located on eleven floors with a height of 33 meters, and the area of ​​the public library is 36,770 square meters, while the area of ​​the cultural activities area is 4 thousand 210 square meters, and the number of volumes in the library at the opening reached 20 thousand volumes and 4 thousand periodicals, audio-visual and multimedia materials. Ten thousand in addition to ten thousand manuscripts and rare books and 50 thousand maps.