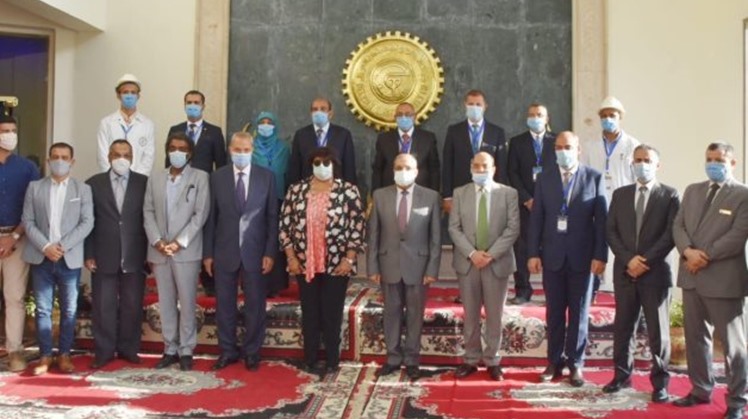 At the beginning of the meeting, Minister of Culture Inas Abdel Dayem congratulated Morsi for assuming the Ministerial Bag for Military Production. The two ministers then inspected the first comprehensive mobile theater model, and its accessories including lighting equipment, power generation units, mobile toilets and a mobile studio, which were implemented by Helwan Diesel Engines Factory (909 Military Factory).

For his part, Morsi pointed out that the Ministry of Military Production believes in the role of art and culture in society and in developing the minds of young people and spreading awareness of the role the government plays in community development.

From this standpoint, Morsi further explained that the Ministry of Military Production is always ready to provide the necessary support to the Ministry of Culture in the field of cultural, artistic and educational projects, supporting mobile theaters by raising the efficiency of existing ones or building new ones.

Morsi added that a contract was signed with the Ministry of Culture represented by the General Authority of Culture Palaces to implement a number of six mobile theaters and equip them with all the necessary accessories, such as lighting, cameras, and any other equipment available at the military production companies.

Furthermore, Abdel Dayem expressed her full confidence in the role played by the Ministry of Military Production to support culture and spread awareness and expressed her pride in what she saw during her tour at the first mobile theater model, noting that a number of theaters that have been suspended from work have been handed over to the Ministry of Military Production in order to qualify them to resume work.

Abdel Dayem also explained that the Ministry of Culture seeks to increase the number of mobile theaters to deliver the cultural product to the areas most in need and support the artistic teams in all governorates.

Also, Abdel Dayem pointed out that the ministry also seeks to provide mobile family libraries at villages in various governorates to spread awareness and encourage citizens to read, adding that it is possible to take advantage of the mobile vehicles produced by the military production companies after equipping them in a way that suits the nature of mobile theaters or family libraries in light of the fruitful cooperation between the two ministries.