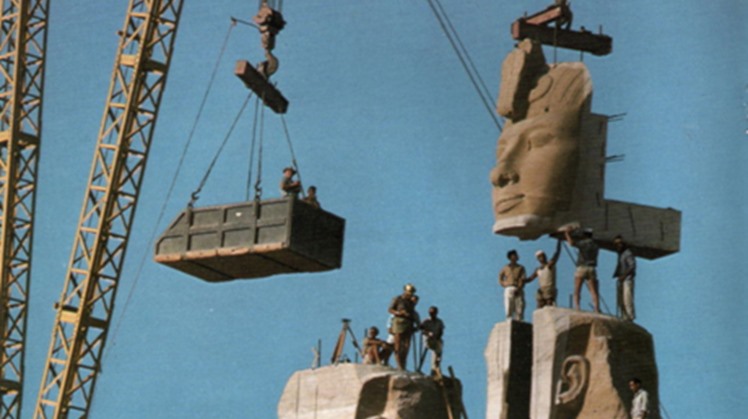 Thu, Mar. 26, 2020
At the National Museum of Egyptian Civilisation (NMEC) overlooking the Ain Al-Sira Lake in Fustat in Cairo this week, Minister of Tourism and Antiquities Khaled El-Enany, Minister of Higher Education Khaled Abdel-Ghaffar, and Ghaith Fariz, director of the UNESCO Regional Bureau for Science, along with more than 20 foreign ambassadors, cultural attachés and heads of archaeological institutes in Egypt and Egyptologists met to celebrate the 40th anniversary of the completion of the International Safeguarding Campaign to save and relocate the Nubia Temples in March 1980.

“This celebration marking the 40th anniversary of the completion of the biggest archaeological and international campaign in the history of the world and the history of UNESCO highlights the strong partnership between Egypt and UNESCO,” El-Enany said during his speech at the event.


Egyptian archaeologists from the Supreme Council of Antiquities (SCA) had repeated the experience of UNESCO’s rescue of the Abu Simbel Temples, as they had succeeded in transporting the beautifully painted tomb of a priest named Tutu, discovered last year in a remote area in the Sohag governorate, and reinstalling it at the Antiquities Museum in the New Administrative Capital, El-Enany said.

They had also succeeded in transporting, restoring, and reassembling and re-erecting obelisks to decorate squares and other areas in Egypt. Over the last 18 months, the SCA had re-erected seven obelisks, including two in the San Al-Haggar archaeological site in Zagazig, two at the New Administrative Capital, one at New Alamein City, one in Cairo’s Tahrir Square, and the last at the Grand Egyptian Museum (GEM) on the Pyramids Plateau in Giza.

The International Campaign that saved the Temples of Nubia during the construction of the Aswan High Dam in the 1960s is remembered as an unprecedented engineering achievement. In 1954, the decision to build the Aswan High Dam was made, leading to the creation of a huge artificial lake covering the Upper Nile Valley from Aswan in Egypt to the Dal Cataract in Sudan.

The Safeguarding Campaign was launched by UNESCO to all its member states to help to rescue the Nubia Temples threatened by the building of the new High Dam. The appeal resulted in the excavation and recording of hundreds of sites, the recovery of thousands of objects, and the salvage and relocation of a number of important temples to higher ground, the most famous of them being the temple complexes of Abu Simbel and Philae.

The campaign ended as a complete and spectacular success. On 10 March 1980, UNESCO announced that the International Campaign to Save the Monuments of Nubia had been successfully completed. Overall, the project had cost more than $80 million, about half of which was paid for by Egypt.

Egypt was also generous in the expression of its gratitude towards the countries that had lent a hand in saving the Nubian cultural heritage. Every nation that had provided financial support received at least a sculpture or other artefact as a gift. The four countries that had been the biggest contributors — the United States, Spain, Holland, and Italy — received the rescued Dendur, Debod, Taffa, and Ellesiya Temples, respectively.

THE ABU SIMBEL TEMPLES: The two Abu Simbel Temples were built by the Pharaoh Ramses II (1279-1213 BCE) to demonstrate his political clout and divine backing to the ancient Nubians.

On each side of the main temple, carved into a sandstone cliff overlooking the Nile’s second cataract, sits a pair of colossal statues of Ramses. Though the statues have been damaged in earthquakes since their construction, they remain an awe-inspiring sight. The Temple is aligned to face the east, and above the entrance sits a niche with a representation of Re-hur-akhty, an aspect of the sun god.

Time has taken its toll on both temples, and in the sixth century BCE sand had already covered the statues of the main temple up to their knees. The Temple was forgotten until 1813, when the Swiss orientalist Jean-Louis Burckhardt found the top frieze of the main Temple and talked about his discovery with Italian explorer Giovanni Belzoni who travelled to the site but was unable to dig out an entry. He then returned to the site in 1817 and succeeded to enter the complex.

The protection of the Temples at Abu Simbel, cut in the living rock, presented considerable technical difficulties as the Aswan High Dam was constructed. Several projects were considered, but the one that was finally chosen consisted of dismantling the temples’ faҫades and the walls of their rooms by cutting them into large blocks, removing these, and rebuilding both temples inside concrete dome-shaped structures in a simulated environment.
2


A cofferdam had to be built while the dismantling operation was in progress because of the already rising water of Lake Nasser behind the dam. The whole huge operation was successfully completed, and the re-sited Temples were reopened officially on 22 October 1968.

This was a task requiring considerable international engineering resources, when the High Dam caused Lake Nasser to rise and inundate the area. For this reason, the sun now strikes the temple a day later than Ramses had originally planned, though the event itself is no less stunning.

THE PHILAE TEMPLES: These are ancient Egypt’s centre for the cult of the goddess Isis, venerated from the ancient Egyptian era through the Graeco-Roman and Byzantine periods, with each ruler making his own additions to the stones at Philae.

The temples were transferred block by block from their original place on Philae Island to Agilika Island 12km south of Aswan during the International Campaign.

The Ministry of Tourism and Antiquities recently started a cooperation scheme with the private sector to develop visitor facilities at local archaeological sites, among them the Philae Temples. In collaboration with the National Bank of Egypt, the ministry has completed the development of the Philae Temples site according to UNESCO standards. The work includes upgrading the Nile dock and the entrance gate and the installation of security kiosks and signs.

OTHER NUBIA TEMPLES: Other Nubia Temples affected by the International Campaign include Qasr Ibrim, the only surviving Nubian site that was not moved. It remained in situ on the east bank of Lake Nasser.

The Dakka Temple dedicated to the god Thoth was moved to New Sebua. The original construction began around 220 BCE and was continued by several Ptolemaic kings and the emperors Augustus and Tiberius during the Roman period.

The Derr Temple is now located at New Amada. It was built by Ramses II for the sun god Re and had statues of Ptah, Amun-Re, Ramses II, and Re-Horakhty as at Abu Simbel. However, during the Coptic period it was converted into a church, and much of its decoration was destroyed.

The Kalabsha Temple is the largest free-standing temple in Nubia. It was built during the late Ptolemaic period and dedicated to the deities Horus-Mandulis, Isis, and Osiris. Neighbouring it was the kiosk of Qertassi.

The Amada Temple was moved as a single unit to New Amada. It is the oldest of the Nubia Temples, dating from the New Kingdom. It was built originally by kings Tuthmosis III and Amenhotep II, with additions by Tuthmosis IV. Kings Seti I and Ramses II restored it and made minor additions.

The Al-Sebua Temple was originally located a few km east of its present location at New Sebua. It was built by king Ramses II and is well known for its court decorated with human-headed sphinxes with the face of the king wearing the double crown of upper and lower Egypt. Thee second court has falcon-headed sphinx. 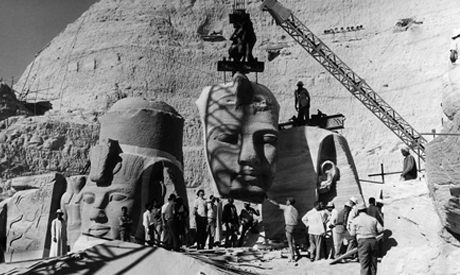 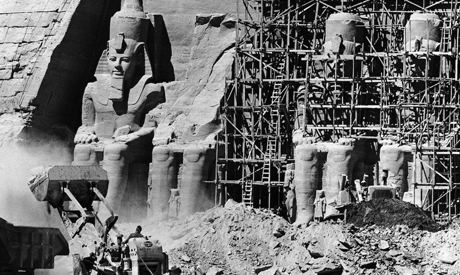