Egypt against all foreign interference in Iraq's affairs, illegal aggression on its territories: Sisi says on Iraqi conference 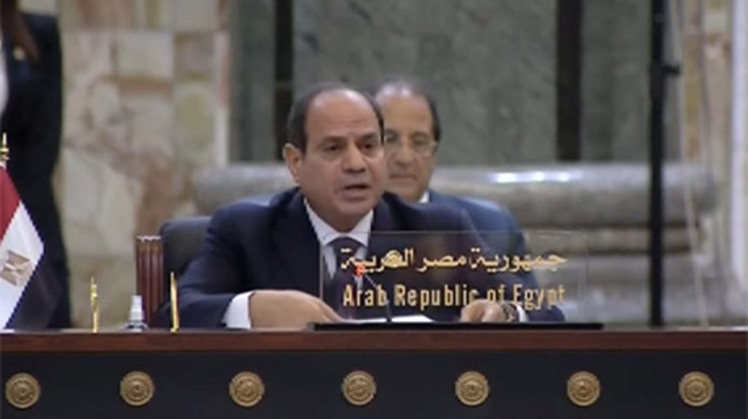 During his speech at the conference, Sisi asserted that Egypt rejects all foreign interference in Iraq's affairs and the illegal aggression on its territories.

President El-Sisi affirmed that Egypt calls on all countries to respect Iraq's sovereignty, adding that Egypt will continue to support the Iraqi government

“Our meeting today is to confirm support and commitment to the established principles in international relations, which are good neighborliness, mutual respect, unconditional refraining from interfering in internal affairs, and refraining from supporting extremist groups or transferring their elements from one country to another,” El-Sisi said.

The conference, which is attended by a number of regional and international leaders, discusses the ways to resolve the region's crises, with a view to creating better circumstances for establishing economic partnership and cooperation between Iraq and neighboring countries.

Saudi Arabia, Kuwait, Jordan, Qatar, the UAE, France, Turkey, and Iran, as well as the Arab League, the Gulf Cooperation Council, and the Organization of Islamic Cooperation attended the event.

The president’s participation in the conference comes within the framework of Egypt's keenness on supporting Iraq in restoring its active and balanced role at the regional level and also for guaranteeing its security and stability, according to Egypt’s Presidential Spokesperson Bassam Rady.

El-Sisi, moreover, hailed the great achievements made in Iraq over the past period under the leadership of Iraqi Prime Minister Mustafa Al-Kadhimi.

He also praised the great role played by the Iraqi army and police to eradicate terrorism.

During his speech, El-Sisi urged the Iraqi people to participate in the upcoming parliamentary elections, which are slated for 10 October.

“You are a nation with an ancient civilization and history… I tell you: Preserve your country… build, cooperate, and participate in the elections.”

"You have brothers in Egypt who are keen on your renaissance, and welcome the transfer of their experience in various fields,” El-Sisi said.

El-Sisi’s visit to Baghdad is his second to the Iraqi capital in two months.

In June, on the first official visit by an Egyptian president to Iraq in 30 years, El-Sisi attended the trilateral summit with Iraqi Prime Minister Mustafa Al-Kadhimi and Jordanian King Abdullah II to strengthen economic cooperation between the three countries. The summit was the fourth between the three leaders since March 2019.

During their summits, the three countries hammered out the details of a long list of cooperation agreements in the fields of energy, health, construction, reconstruction, agriculture, pharmaceuticals, and food.

Egyptian-Iraqi relations witnessed a remarkable boom during the last few years and entered a new phase of cooperation, with the economic file topping the field of cooperation between Cairo and Baghdad.

The trade exchange between Egypt and Iraq increased from $800 million in 2015 to $1.650 billion in 2018, which is considered the largest figure in trade exchanges between the two countries since 2003, according to data from Egypt’s State Information Service (SIS).

The Egyptian president arrived Saturday in Iraq where he was received by Iraqi Al-Kadhimi at Baghdad International Airport.

He later held a meeting with Iraqi President Barham Salih at Baghdad Presidential Palace to discuss bilateral relations and other issues of mutual concern.

The President also met with the Emir of Qatar Tamim bin Hamad Al Thani on Saturday morning on the sidelines of the conference.