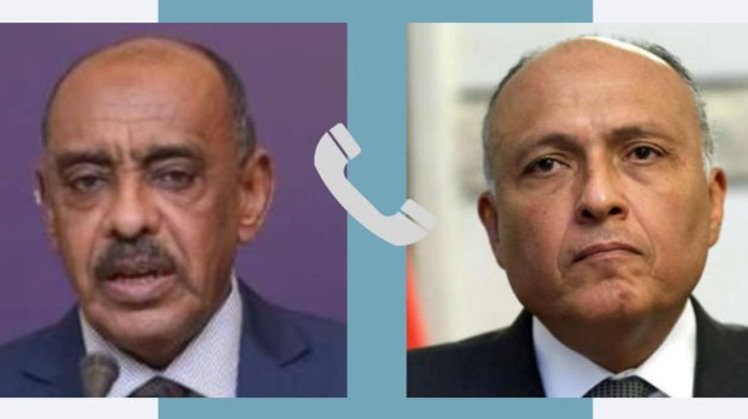 Wed, Jan. 11, 2023
CAIRO – 11 January 2023: Egypt’s Foreign Minister Sameh Shoukry congratulated his Sudanese counterpart, Ali Al-Saddiq, on the launch of the second and final phase of the political process in Sudan in a phone call on Wednesday.

Shoukry wished Sudan success in implementing the political process and achieving national consensus, a statement by the Egyptian Ministry of Foreign Affairs read.

During the phone call, the ministers discussed the Grand Ethiopian Renaissance Dam (GERD) file among a number of regional and international issues of mutual concern.

They agreed on the importance of continuing coordination and consultations during the coming period.

The ministers agreed on the importance to activate the work of the joint political and technical committees between Egypt and Sudan and maintain the periodicity of their meetings for the benefit of the two countries and their peoples.

They also highlighted the importance of boosting joint projects, including power linkage and agricultural integration projects.

Shoukry said he looks forward to meeting Saddiq’s invitation to visit Sudan in the earliest opportunity.

On Monday, Egypt has praised that the launch of the final phase of the political process in Sudan on Sunday as an “important and positive development”.

In a statement by the foreign ministry on Monday, Egypt stressed its confidence in the Sudanese parties’ capability to reach a final and comprehensive political agreement that ends transitional period and achieves the ambitions of people.

Egypt has called for all regional and international parties to resume its development and economic assistance to Sudan in order to help the sisterly country deal with developmental and economic challenges that it faces, the ministry said.

This should come in a way that is positively reflected on the Sudanese citizens’ living standard and contributes to achieving a comprehensive political consensus in Sudan, the ministry added.

Head of Sudan’s Sovereign Council Abdel Fattah Al-Burhan and his deputy Mohamed Hamdan Daglo Hemetti has pledged to hand over power to a civilian transitional government that will be formed by the end of the current political process.

The military leaders partook in the launch of the second and final phase of the political process facilitated by the tripartite mechanism of the United Nations, African Union, and the Intergovernmental Authority on Development (IGAD).