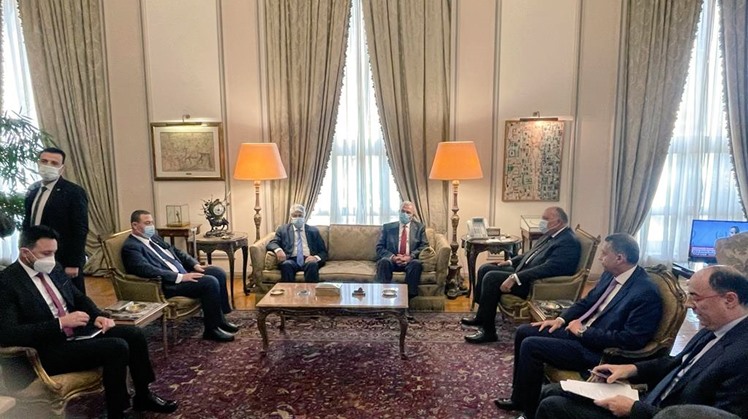 Tue, Mar. 8, 2022
CAIRO – 8 March 2022: Egypt's Minister of Foreign Affairs Sameh Shokry reasserted on Monday that Egypt is backing reconstruction in Gaza Strip, and the two-state solution to the Palestinian Cause.

That was during his meeting with Deputy Palestinian Prime Minister Ziad Abou Amr, and Palestinian Minister of Social Development Ahmed Magdalany, both are members of the executive committee of the Palestinian Liberation Organization.


The two Palestinian officials came to Cairo to communicate with the Egyptian minister of foreign affairs the latest developments on the Palestinian territories, as well as the "growing difficulties and challenges," as indicated by the ministry's press statement.


Equally, the delegation expressed appreciation for the Egyptian role in supporting the Palestinian Cause, and the legitimate rights of Palestinian people. That is in addition to all the efforts it deploys to achieve reconciliation among the Palestinian factions.


On his side, Minister Shokry asserted that Egypt continues to contact regional and international parties that can help create an environment favorable for the resumption of negotiations between the Palestinians and the Israelis. In that context, he stressed that Egypt adopts the Palestinian people's right to establish "their independent state on the borders of June 4, 1967."