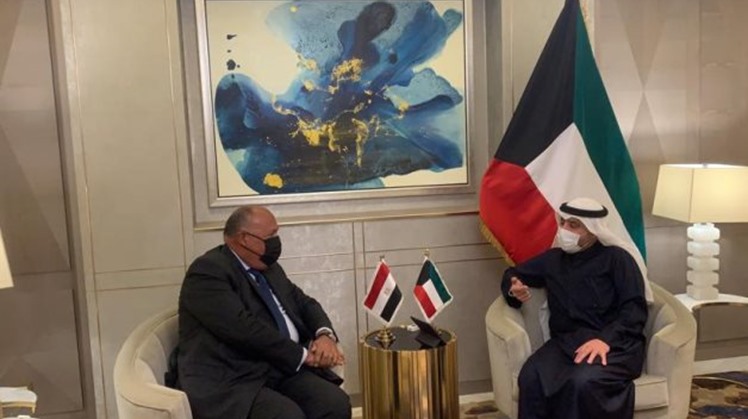 The meeting was held during Shoukry’s current visit to Kuwait to participate in the Consultative Meeting of Arab foreign ministers.

Shoukry stressed during the meeting the solid relations that unite the two countries and peoples, and the importance of continuing to work on developing areas of bilateral cooperation in line with the deeply-rooted relations and the directives of the two countries’ leaderships to advance their path, the statement said.

Shoukry also expressed Egypt’s aspiration to host the 13th session of the Joint Ministerial Committee this year, headed by the two foreign ministers, for being the most comprehensive framework for promoting the various aspects of relations between the two countries, the statement continued.

Minister Shoukry touched on what Egypt is witnessing of a development boom and unprecedented national projects in parallel with the continuation of implementing a radical economic reform program, and hence the importance of Kuwaiti investments benefiting from that boom as well as the preferential incentives that are provided by the current investment environment in Egypt, the statement said.

The Egyptian Foreign Minister also hailed the role of the Kuwait Fund for Arab Economic Development in supporting development projects and plans in Egypt.

Moreover, Minister Shoukry expressed appreciation for the generous care the Egyptian community receives from the State of Kuwait and its leadership, commending the role of this community as a bridge of communication between the two countries and the two brotherly peoples.

He hailed Kuwait's presidency of the current session of the Arab League Council, and Kuwait's hosting of the Arab Foreign Ministers’ Consultative Meeting on Sunday, in a manner that enhances mechanisms of consultation and coordination between Arab countries.

The meeting also tackled the two countries’ stances regarding the current challenges and the most prominent issues of common concern.

Minister Shoukry affirmed Egypt's firm stance for rejecting any interference in the affairs of Arab countries and Egypt’s support for the security and stability of the Arab Gulf states for being closely related to Egyptian national security.

Whereas the Kuwaiti Foreign Minister stressed his country's appreciation of Egypt's role as a mainstay of security and stability in the region, expressing Kuwait's support for the tangible developmental boom that Egypt is witnessing, and for all that preserves Egypt's security and stability, and achieves the interests of both countries and their aspiration towards further prosperity and development, the statement said.