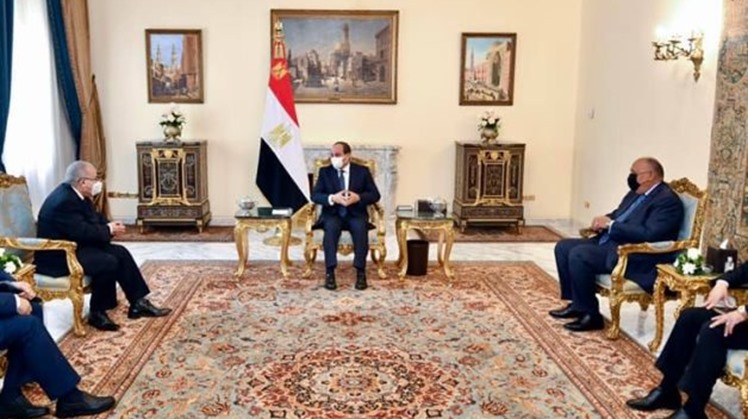 In a meeting in Egypt on Monday, Sisi and Lamamra also affirmed the need to preserve the Libyan unity and sovereignty and to unify the national institutions in Libya, especially the military and security institutions.

This comes to enhance the international efforts seeking to end the presence of foreign forces and mercenaries in Libya, a statement by the Presidency said.

Sisi and Lamamra discussed developments in Tunisia. They expressed Arab support to President Kais Saied as well as the measures he takes and the efforts he makes to achieve stability in the country.

During the meeting, Lamamra handed over a written message from Algerian President Abdelmadjid Tebboune to Sisi, which expressed Algeria’s appreciation of its firm and distinguished relations with Egypt on the official and popular levels.

The message also affirmed Algeria’s keenness to enhance bilateral cooperation fields with Egypt in all fields.

President Tebboune in the message also affirmed that Algeria is looking forward to maintain further coordination and consultation with Sisi during the coming period in the face of the several challenges facing the region and the Arab nation.

Sisi asked conveying his greetings to President Tebboune, hailing the level of brotherly bilateral relations between Egypt and Tunisia.

The president affirmed Egypt’s keenness to boost bilateral cooperation fields with Algeria at all levels through activating the joint bilateral commissions between the two countries.

The meeting affirmed the importance of the next round of the higher joint commission between the two countries at the level of premiers later this year. This is in addition to holding the political consultation mechanism at the level of foreign ministers of both countries.