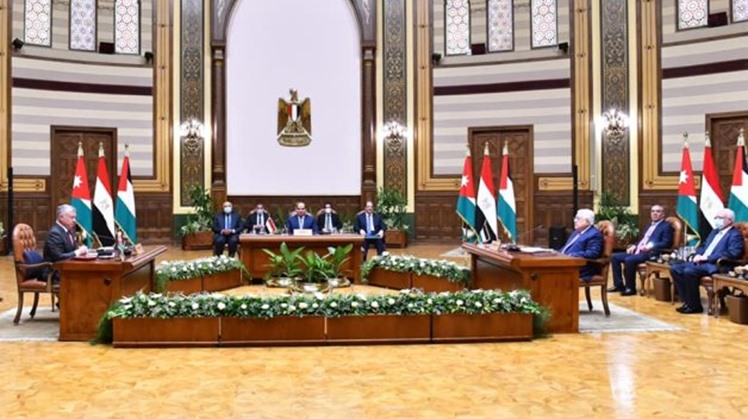 Thu, Sep. 2, 2021
CAIRO – 2 September 2021: The final statement of the Egyptian- Jordanian- Palestinian summit held, on Tuesday, in Cairo asserted the importance of the Palestinian cause to the Arab region.

The statement also retreated the firm positions of Egypt and Jordan in supporting the Palestinian people and their just and legitimate rights, including having an independent state on the lines of June 4, 1967, with East Jerusalem as its capital, in accordance with international law, relevant international legitimacy resolutions and the Arab Peace Initiative.

The statement added that the three leaders affirmed their rejection of the illegal Israeli measures that undermine the two-state solution and threaten the chances of achieving peace in the region, including the construction and expansion of settlements in West Bank, including East Jerusalem, the demolition of houses and the displacement of Palestinians from their homes.

The statement stressed the necessity of respecting the rights of Sheikh Jarrah’s families in their homes.

The three leaders stressed the need to preserve the historical and legal status in Jerusalem and its Islamic and Christian holy sites, and to reject all practices that aim to prejudice this situation.

The statement pointed out that the tripartite summit discussed the recent moves made by the three countries at the regional and international levels, especially those aimed at finding a real political horizon to restore effective efforts to resolve the conflict on the basis of the two-state solution, as the only way to achieve a comprehensive and just peace.

The leaders affirmed that this just, comprehensive peace is a strategic option and a necessity for regional and international peace and security, and all efforts must be united to achieve it.

According to the final statement, the leaders of the three countries instructed to work together to develop a vision to activate efforts to resume negotiations, and to work with brothers and partners to revive the peace process, in accordance with the approved references.

The statement welcomed the efforts made by the Egyption side aiming to stabilize the truce and reconstruction in the Gaza Strip, and called on the international community to exert its efforts to alleviate the humanitarian crisis in the Strip, by participating in the reconstruction efforts, and urging Israel to respond to the basic and humanitarian needs of the people of Gaza Strip in line with its responsibilities in accordance with the law International.

The Three leaders also stressed the importance of continuing to work to achieve Palestinian national reconciliation and consult on the ideas put forward in this context.

The statement also stressed the importance of the response and engagement of all Palestinian parties to the political efforts made by Egypt and upholding the higher interest of the Palestinian people.

According to the final statement, the leaders stressed the importance of the international community continuing to support the United Nations Relief and Works Agency for Palestine Refugees (UNRWA) and the need to provide the financial support it needs to maintain its ability to provide vital services to Palestinian refugees in accordance with its UN mandate.

The next trilateral summit will be held in Jordan at a time that will be determined and announced later, according to the statement.

The official spokesman for the Presidency, Ambassador Bassam Rady, said that ‘within the framework of the keenness to strengthen the strategic relations that bring Egypt, Jordan and Palestine together, and based on the common will to intensify the level of continuous coordination between the three brotherly countries regarding the developments and challenges facing the Palestinian cause, In an effort to achieve all the legitimate rights, hopes and aspirations of the Palestinian people, President Abdel Fattah El-Sisi hosted today King Abdullah II Jordan and the Palestinian President Mahmoud Abbas at a tripartite summit held in Cairo on September 2, 2021.