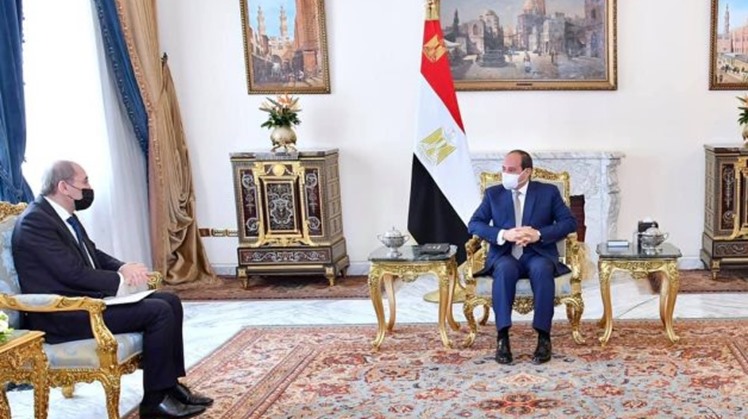 This comes through exchanging expertise and joint investments between the two countries in light of the Egyptian comprehensive development track and the major national projects being implemented in Egypt, Radi said.

Sisi held a meeting with Safadi in Cairo with the attendance of Egyptian Foreign Minister Sameh Shoukry, during which they discussed bilateral relations and regional issues of mutual concern.

Safadi conveyed the greetings of Jordanian King Abdullah II to Sisi, expressing Jordan’s deep appreciation for Egypt on the official and popular levels and also hailing the longstanding relations gathering the two countries.

The two sides called for enhancing the economic relations and trade exchange between the two countries and boosting cooperation between relevant authorities of both countries in the face of the coronavirus pandemic, Radi said.

The meeting also hailed the trilateral cooperation between the two countries and Iraq and affirmed the need to build on the outcome of the summit held in Baghdad last June.

The two sides called for taking actual steps that contribute to increasing cooperation and coordination among the three countries, especially what is related to the energy and power linkage projects and industrial complexes.

The meeting discussed the developments of the issues in the region, including Lebanon, Syria and Libya.

They also exchanged visions on the developments of the Middle East peace process and on the coordination between the two countries in this regard.

Safadi hailed the Egyptian efforts that aimed to establish ceasefire between the Israelis and the Palestinians and the Egyptian initiative for reconstruction in this regard.

Sisi asked that his greetings be conveyed to the Jordanian king, praising the firm relations gathering the two countries and the high level these relations have reached on all levels.

The Egyptian president voiced aspiration to enhance the bilateral relations in a way that contributes to achieving the interests of both countries and peoples, especially on the economic and commercial levels.

Sisi hailed the Jordanian government’s efforts to care for the Egyptian community in Jordan.