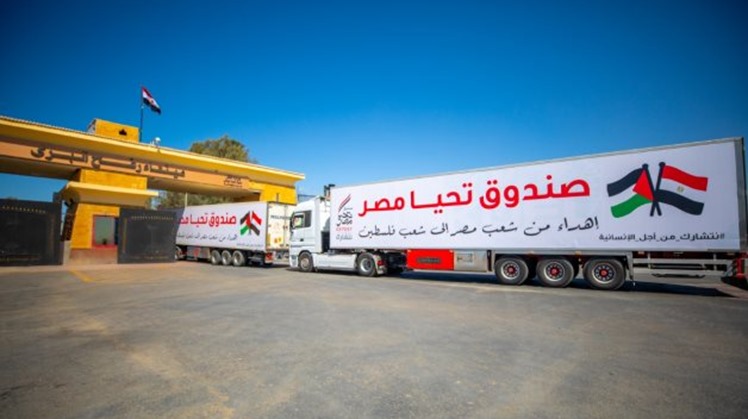 Under the directives of President Abdel Fatah al-Sisi, Egypt sent humanitarian aid to citizens of Gaza.

This comes a day after an agreement was reached between Palestinian President Mahmoud Abbas, and General Abbas Kamel to hold a series of meetings with the general secretaries of the Palestinian factions in Cairo, as part of Egypt's efforts in support of unifying the Palestinian position.

On Sunday, a new aid convoy from Long Live Egypt Fund arrived at the Rafah land port to deliver Egyptian aid to Palestinian side, in implementation of President Abdel Fattah El-Sisi's directives to provide aid and care to the Palestinian brothers.

This is the third aid convoy that the Fund sends to the Gaza Strip within the Egyptian Initiative for the Reconstruction of the Strip. It includes 20 containers loaded with more than 500 tons of vegetables, fruits, cans, luggage, and electrical tools, in addition to shoes.

On Friday, Israel and the Gaza factions started a ceasefire proposed by Egypt after Israeli airstrikes and artillery fire killed 254 Palestinian people, including women and children.

The Gaza factions also fired rockets at Israeli lands in retaliation for the Israeli assaults against Palestinians in Jerusalem.