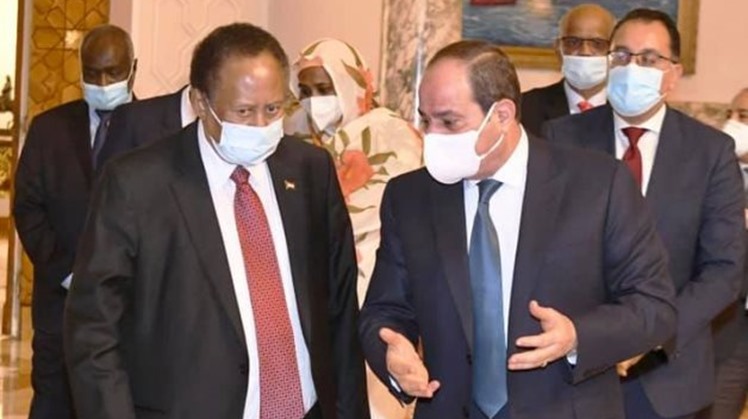 Sisi and Hamdok met in Cairo today, less than a week after the latter made an official visit to Sudan, during which he and the Sudanese leaders expressed rejection of Ethiopian unilateral steps to execute the second phase of dam filling with or without an agreement among the three countries.

Sisi, during the visit, also affirmed backing a Sudanese proposal to form a quartet committee that includes the European Union, the United Nations, the United States and the African Union to mediate the talks.

During their meeting on Thursday, Sisi and Hamdok agreed on “intensifying communications with the regional and international parties to activate the Sudanese proposal to form an international quartet to mediate the talks,” the Egyptian Presidency said in a statement.

The two leaders agreed to work on activating the proposal to “help reach a comprehensive and binding legal agreement on the rules of filling and operating the Renaissance Dam before the next rainy season,” the Presidency said.

They also agreed on intensifying Egyptian-Sudanese coordination on the GERD issue during this “current critical stage,” the Presidency added.

Sisi, during the meeting, reiterated Egypt’s continuous support to Sudan through cooperation and coordination on all issues of mutual concern. The president highlighted the importance of Hamdok’s current visit to Cairo to follow up on the bilateral relations and ongoing cooperation projects between the two sides.

The meeting discussed cooperation between Egypt and Sudan in various fields, especially concerning transferring the Egyptian experience of economic reform to Sudan and training the Sudanese cadres.