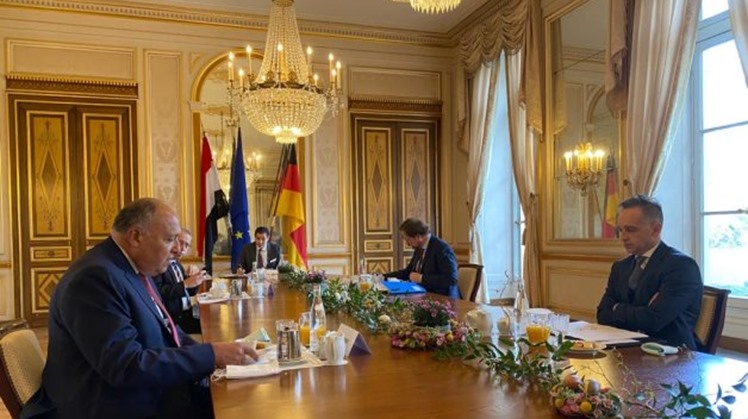 
This came during a meeting they had in Paris during a visit that comes as part of the two sides' keenness on exchanging viewpoints periodically to push forward bilateral relations and discuss the latest as regards many regional issues, especially Ethiopia’s dam file.

Spokesman for the Foreign Ministry Ahmed Hafez said Shoukry updated the German minister on the accomplishments Egypt realized over the past period as well efforts exerted to counter terrorism.

The two sides discussed the latest regional developments, including those connected with the Palestinian issue.

Talks tackled ways of benefiting from the meeting in Paris of the Quartet committee to discuss the Mideast peace process as well as achieving a political settlement to the Libyan crisis that would preserve the integrity of Libyan territories and guarantee withdrawal of all mercenaries from the war-torn country.

Shoukry renewed Egypt's welcome of the approval of the new Libyan government by the parliament.

Shoukry briefed his German counterpart on the Sudanese proposal calling for developing the mechanism of negotiations over the controversial dam, which Ethiopia is building along the Nile, via forming an international quartet chaired by the Democratic Republic of Congo, in its capacity as the current chair of the African Union, with the participation of the EU, the US and UN.