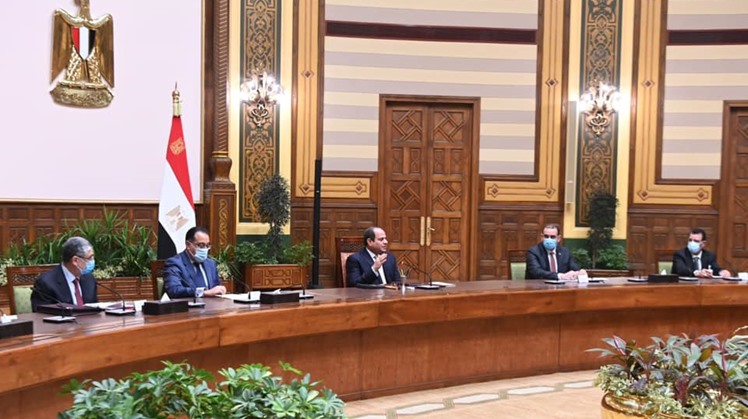 El-Sisi said Egypt is keen to support in all realms that help Iraq overcome various challenges and preserve its security and stability.

He also affirmed Egypt’s keenness to boost cooperation with Iraq at the bilateral level and the trilateral level with Jordan, in light of the strategic importance it attaches to this cooperation.

The president stressed Egypt’s strong will to continue fruitful cooperation with the Iraqi side in all fields.

For his part, Battal conveyed Iraqi President Barham Salih’s greetings to his Egyptian counterpart, El-Sisi, and affirmed Iraq’s appreciation to the Egyptian efforts to support Iraq in all fields.

He expressed keenness to benefit from the Egyptian experience in establishing developmental projects, especially in housing, infrastructure, electricity, agriculture and health.

Egypt and Iraq earlier agreed on ‘oil-for-development’ agreement, where Egyptian companies would implement development projects particularly in infrastructure and reconstruction in return for oil, according to a statement from the Egyptian Ministry of International Cooperation on Friday.

The agreement was reached during a meeting between Egyptian Minister of International Cooperation Rania Al-Mashat and Iraq’s Battal. They discussed the development of relations between the two countries and the results of the joint Egyptian-Iraqi Higher Committee which was held in October to strengthen economic diplomacy, the statement added.

“Egypt has a successful experience in infrastructure model diplomacy and generational funds, and that the Ministry is committed to strengthen economic diplomacy to deepen the mutual understanding between the two countries and accelerate the pace of development in both countries,” Al-Mashat said.

The two countries are also aiming to increase the volume of intra-trade and remove any obstacles in the flow of export goods between the two countries, the statement continued.

The Minister referred to the most prominent areas of cooperation, foremost of which is the ‘oil-for-development’ agreement to benefit from the Egyptian experience in the field of social housing, and the establishment of joint companies for chemical industries.

Al-Mashat stressed that the Ministry of International Cooperation is committed to work with all parties in development and ensure continuous communication to accelerate the pace of implementation of the decisions of the third session of the Joint Egyptian-Iraqi High Committee.

For his part, Battal, the Iraqi Minister of Planning, underscored the value of Egyptian-Iraqi relations and Iraq’s aspiration to strengthen cooperation, adding that Iraq is currently working on implementing what has been agreed upon during the work of the Joint High Committee, and that the ‘oil for development’ agreement with Egypt is currently being formulated and developed, and it will be completed soon.

During the meeting, the two ministers discussed several other areas of cooperation, including cooperation in the field of digital transformation in light of the COVID-19 pandemic, and joint cooperation and coordination in tripartite cooperation projects in the fields of energy, electricity and oil to maximize the mutual benefit between the two countries, which contribute to achieving economic development.

The Egyptian-Iraqi Joint High Committee was held in October of this year and witnessed the signing of 15 documents in various fields to enhance joint cooperation between the two sides, and the organization of an economic and commercial forum with the participation of the heads of the federation of chambers, trade and concerned ministers from both sides.

During a tripartite summit held in Amman at the end of last August, headed by King Abdullah II, and with the participation of Egyptian President Abdel Fattah Al-Sisi and Iraqi Prime Minister Mustafa Al-Kazemi, the leaders stressed the importance of strengthening cooperation and adopting the best ways and mechanisms to translate strategic relations on the ground.

The leaders highlighted areas of cooperation in economic, such as electrical connectivity, energy projects, and the common economic zone, especially in light of the global consequences of the emerging coronavirus pandemic on health, food and economic security.

During August’s summit, the leaders directed the relevant ministers to focus on the health and medical sectors, education, energy and intra-trade; encourage investment and economic cooperation, and benefit from the lessons of the emerging corona virus pandemic, in order to deepen cooperation in the face of the impact of the pandemic.

The leaders instructed the foreign ministers to set tasks entrusted to the executive secretariat, including the tasks of preparing for tripartite and ministerial summits, following up on their outputs, and submitting the necessary reports for leaders' meetings.